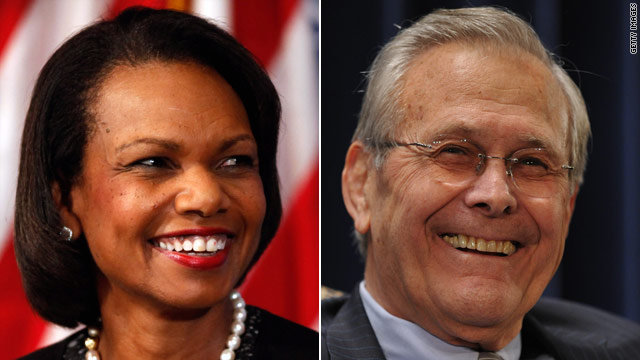 Washington (CNN) - Former Secretary of State Condoleezza Rice and Secretary of Defense Donald Rumsfeld applauded the successful mission to kill Osama bin Laden under the Obama administration, but also highlighted the pivotal role their team played in the search for America's most wanted terrorist.

Rice said that the discovery of bin Laden's whereabouts was made possible by intelligence gathered during the Bush administration, pointing to how the roundup of al Qaeda field generals such as Khalid Sheikh Mohammed in 2003 and Abu Faraj al Libi in 2005, helped provide the link to bin Laden's courier, who ultimately lead C.I.A operatives to the compound where bin Laden was staying.

"We all have to realize that war on terror, the fight against terrorists, is a tough fight, and the key is information," Rice said. "Now let's remember that in the early days, we knew very little about how al Qaeda operated and the roundup of their field generals like Khalid Sheikh Mohammed let us not just to learn that there was a courier, I remember when they learned there was a courier who might be a link to Osama bin Laden, but we also learned from those people about the structure of al Qaeda unfolding plot lines."

In a CNN interview on Tuesday, Rumsfeld recalled when the Bush administration was criticized for keeping seemingly low-level prisoners, who were drivers, chauffeurs, couriers, or bodyguards at Guantanamo Bay and defended Bush-era interrogation methods on detainees, such as waterboarding, saying such techniques were ultimately "enormously valuable" for intelligence gathering.

In Rumsfeld's opinion, the new reality following bin Laden's death does not necessarily change the U.S. mission in Afghanistan.

"I think Osama bin Laden will be replaced by a successor. If we capture and kill them, that individual will be replaced. The people are determined. They are vicious. They are capable of raising money and recruiting people and training them to go out and kill innocent men, women, and children," Rumsfeld said.

Another member of the Bush administration, Retired Gen. Colin Powell, who served as secretary of state under Bush, told CNN on Monday that Obama handled the situation brilliantly.