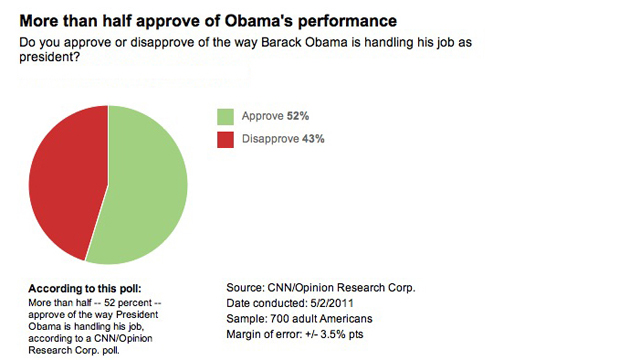 Washington (CNN) - President Barack Obama is seeing a boost in his poll numbers on how he's handling terrorism and the situation in Afghanistan, thanks to his Sunday announcement that Osama bin Laden has been killed, according to a new national survey.

But a CNN/Opinion Research Corporation poll released Tuesday also indicates no large bump in the president's overall approval rating compared to a poll taken over the weekend, but his rating has been trending upward since mid-April.

The survey was conducted Monday, one day after the president's announcement that the al Qaeda founder and leader was shot and killed by U.S. forces during a raid in Pakistan. While the poll indicates that two-thirds of the public sees bin Laden's killing as a major achievement, more than nine out of ten say the al Qaeda terrorist network will remain a threat.

But the poll indicates that the president's overall approval rating, now at 52 percent, is up just one point from a poll conducted Friday through Sunday; it is up four points from Obama's 48 percent approval rating in early April. All interviews in the poll taken this weekend were conducted before the announcement of bin Laden's death.

"While President Obama's rating on terrorism and on how he's handling of Afghanistan each went up seven points, his approval rating on the economy and the deficit are down three points in that same time span," says CNN Polling Director Keating Holland. "Remember that the economy is still the most important issue. When CNN last asked Americans to name their top issue last year, 52 percent said the economy was most important and only four percent chose terrorism, putting it seventh on the list."

The killing of bin Laden does appear to give the president a boost on how he's perceived. Fifty-eight percent now think the president's a strong and decisive leader, up five points from early April.

Two-thirds of people questioned say they consider the death of bin Laden as a major achievement for the United States, with 23 percent terming it a minor achievement and nine percent saying it wasn't an achievement at all.

"But nearly all Americans believe that bin Laden's death will not end the threat from al Qaeda, and the number of Americans who expect a terrorist attack in the next few weeks is at its highest level since the start of the Iraq War in 2003," adds Holland.

Six in ten say that things are going well for the U.S. in Afghanistan, an all-time high for that question. But the poll indicates support for the war in that country has barely moved since January and two-thirds would like to see some or all U.S. troops withdrawn.

The Obama administration is deciding whether or not to release more proof that Osama bin Laden is actually dead. His body already has been buried at sea, but a U.S. government official says photos were taken of bin Laden's body after his death. Fifty-six percent say the government should release a picture of bin Laden's body.

The killing of the al Qaeda founder and leader comes just one month after Obama launched his re-election campaign. The poll indicates the number of Americans who say they plan to vote for Obama has also not budged.

"But the president does come away with one 2012 advantage - the public now perceives him as a winner. A majority of Americans now say he will win re-election in 2012; in January most thought he would lose," says Holland.

How does the president's modest bump so far in the polls compare to his predecessors?

"But the bounce in his approval ratings, which is the most heavily watched indicator for a president's clout, was short-lived," says Holland. "While President Bush's numbers stayed in the mid 60's through January 2004, it was down to around 50 percent by February. Saddam's capture is probably the closest historical analogy we can draw, but because it occurred so close to the start of a presidential campaign, it may not provide good guidance for the length of any bounce President Obama picks up today."

Holland notes as well that the gains Bush's father made immediately after the Persian Gulf War in 1991 also petered out just as a presidential campaign began.

The CNN/Opinion Research Corporation poll was conducted Monday, May 2, with 700 national adults questioned by telephone. The survey's overall sampling error is plus or minus 3.5 percentage points.