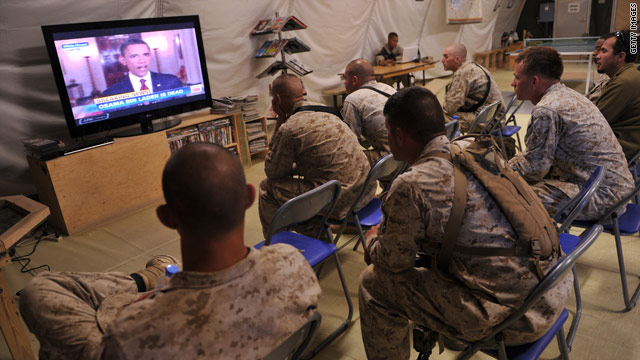 Washington (CNN) - The death of Osama bin Laden is giving a bipartisan group of House members who have long opposed the U.S mission in Afghanistan a new boost to make the case that the president should move to end the war in Afghanistan.

North Carolina Republican Walter Jones tells CNN President Obama should "declare victory" after taking out bin Laden and now come up with a timeline for wrapping up the U.S operation in Afghanistan.

On Thursday Jones will join anti-war Massachusetts Democratic Rep. Jim McGovern, to unveil new legislation called "the Afghanistan Exit and Accountability Act, " requiring the president to submit to Congress a timeline for withdrawing troops, with specific dates, including when the U.S. will hand over security and military responsibilities to the Afghan government. The administration has said it will begin withdrawing some troops in July. While the legislation doesn't dictate an exit date, Jones said he wants to see a plan that brings U.S. forces home within a year.

Earlier this year, McGovern and Jones wrote an op-ed in the Washington Post arguing the government of Afghanistan was corrupt and "al Qaeda was someplace else." They maintained the costs in lives and U.S. resources was too high at a time where Congress was slashing government programs, and it was time to talk about withdrawal now, "not a plan to stay there four more years and 'then we'll see'."

"Gates has already said we will be there until 2014. I think we ought to be out of Afghanistan in the next year or so," Jones said, adding, "The leader of al Qaeda is now dead – there are no al Qaeda to speak of in Afghanistan."

Directly tying the war to the broader national debate about reducing government spending, the bill would also require the president to report quarterly to Congress about the status and costs of the transition. A summary provided by McGovern's office says these reports must detail "the human and financial costs of remaining in Afghanistan, including the increased deficit and public debt."

Jones said bluntly the U.S. can't afford the costs of the war in Afghanistan. "Why are we spending $8 billion a month? We are a broke nation," the North Carolina Congressman said. "We can't even pay our own bills, there's borrowed money from China to prop up Karzai who half the time doesn't even want us there."

Hoping to highlight the significant savings of speeding up the U.S. withdrawal, Jones and McGovern would also require the president to report how much money would be saved from "an accelerated redeployment" if the U.S. concluded the transition of all U.S. military and security operations within 6 months.

While Jones criticized the U.S. mission in Afghanistan he complimented President Obama and U.S. intelligence and military personnel for the successful operation against bin Laden, arguing it should be a model for future military missions.

To date Jones said he has eight House GOP co-sponsors for his bill and McGovern's office said it has an equal number of Democrats on board. Opponents of the Administration's Afghanistan strategy, McGovern and Jones were planning to introduce this bill even before bin laden was killed, and it's unclear whether it would get much more support than their previous efforts to press for an end to the war.

The GOP-led House has stood by the president and continued to provide support for the mission in Afghanistan. The number two House Democrat, Steny Hoyer of Maryland, noted Tuesday that the July date for beginning withdrawal is only few months away and said "I don't see that the Administration is going to change it's stated policy of reducing very substantially our presence in Afghanistan in the near term."

Speaker John Boehner Monday made a point to stress the need to stay in Afghanistan, saying, "This makes our engagement in places like Pakistan and Afghanistan more important, not less."

Asked about Boehner's comments Jones said, "I think he's off base on that one," and said he believes the American people support his position.

"The American people are tired of borrowing money to prop up a crook named Karzai."