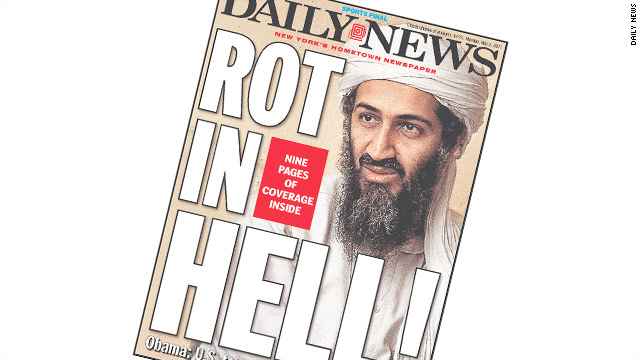 Washington (CNN) - Of all the newspaper headlines covering the death of Osama bin Laden, the most provocative may have been the New York Daily News.

Their "Rot in Hell" Monday headline, with a full front-page photo of bin Laden, was mentioned by the cable news networks and generated buzz on the on-line social networks.

So do Americans think that the founder and leader of the al Qaeda terrorist network is now in hell?

According to a CNN/Opinion Research Corporation poll released Tuesday, 61 percent of the public says yes, with one in ten saying no and nearly a quarter unsure.

"Not all Americans believe in hell - a point of view reflected in the relatively large number of 'don't know' responses - and many religions don't include punishment in an afterlife as part of their teachings," says CNN Polling Director Keating Holland. "Nonetheless, the six in ten who say bin Laden is in hell reflects how strongly many Americans feel that bin Laden was an evil figure."

"This is one question on which there is little partisan division - at least six in ten Democrats, independents and Republicans all believe bin Laden is in hell," adds Holland.

The survey was conducted Monday, one day after the president's announcement that the al Qaeda founder and leader was shot and killed by U.S. forces during a raid in Pakistan.

Seven-hundred national adults were questioned by telephone for the CNN/Opinion Research Corporation poll. The survey's overall sampling error is plus or minus 3.5 percentage points.