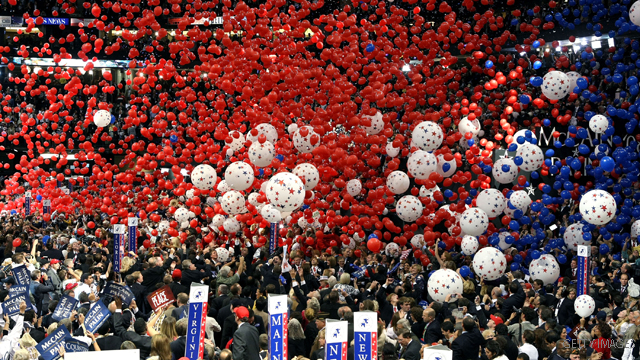 CNN Poll: Still no front-runner in the battle for the GOP nomination

Greenville, South Carolina (CNN) - A new national poll indicates the race for the Republican presidential nomination remains wide-open, with none of the probable or potential GOP White House contenders above 20 percent, according to a new national poll.

The CNN/Opinion Research Corporation survey's Thursday release comes hours before the first Republican presidential debate of the 2012 election cycle. The debate is being held in South Carolina, which holds the first southern primary on the road to the White House.

The poll also indicates President Barack Obama is ahead of all probable and possible GOP candidates tested in hypothetical general election matchups, but the person who comes closest to Obama may surprise you.

According to the survey, conducted just before the news of the death of Osama bin Laden, 16 percent of Republicans and independents who lean Republican say they would be likely to support Mike Huckabee for the Republican presidential nomination. The former Arkansas governor ran for the White House in 2008, and while to date he hasn't taken many steps towards launching another campaign, he has definitely not ruled out another bid for his party's nomination.

Fourteen percent say they'd back Donald Trump. The billionaire businessman, real estate mogul and reality TV star says he will announce by June if he's going to run for the White House.

One point back is Mitt Romney, at 13 percent. The former Massachusetts governor and 2008 GOP White House candidate has been adding to his campaign team in recent months and last month launched a presidential exploratory committee.

The poll indicates that 11 percent support Sarah Palin. The former Alaska governor and 2008 Republican vice presidential nominee has not made any serious moves towards launching a campaign, but says she isn't closing any doors.

Former House Speaker Newt Gingrich and Rep. Ron Paul of Texas, who has run for the White House twice before, both stand at ten percent in the poll. Both men have taken steps towards formally launching campaigns. Everyone else questioned in the survey registered at five percent or less.

"No GOP candidate has a statistically significant lead, so it's way too soon to start talking about frontrunners," says CNN Polling Director Keating Holland.

Is it all about name recognition at this still relatively early point in the GOP horserace?

"Yes, but name recognition alone is not enough. Otherwise one of the best known candidates, Palin, would not be stuck in fourth place. Trump and Palin, with the highest name ID, also have the highest unfavorable ratings," adds Holland.

Fifty-nine percent of all Americans dislike the former Alaska Governor and 64 percent have a negative view of Trump, according to the poll. The survey indicates Gingrich also has relatively high unfavorables, but the favorable ratings for Romney and Huckabee outweigh their unfavorables, although both are unknown to more than a quarter of the general public.

Seventy-eight percent of Democrats or independents who lean Democrat say they back Obama as the party's presidential nominee next year, with just over one in five saying they'd prefer another Democrat. That number has remained relatively consistent over the past year.

What about the showdown in November 2012?

According to the poll, taken before the announcement of Osama bin Laden's death, President Barack Obama has an edge over all the top GOP candidates in hypothetical match-ups.

Who does best against Obama? Paul. The congressman from Texas, who also ran as a libertarian candidate for president in 1988 and who is well liked by many in the tea party movement, trails the president by only seven points (52 to 45 percent) in a hypothetical general election showdown. Huckabee trails by eight points, with Romney down 11 points to Obama.

The poll indicates the president leading Gingrich by 17 points, Palin by 19, and Trump by 22 points.

"It should be obvious to any political observer that hypothetical general election match-ups at this stage of the game have relatively little predictive value," says Holland.

"GOP primary match-ups are another matter - since the modern era of presidential primaries began in 1972, there have been six times when the GOP nomination was up for grabs. In five of those six election cycles, the eventual GOP winner was leading the polls taken in April of the previous year. That may mean little in 2011 since no Republican hopeful has a commanding lead, but it also means that the history books won't let us completely dismiss these polls," adds Holland.