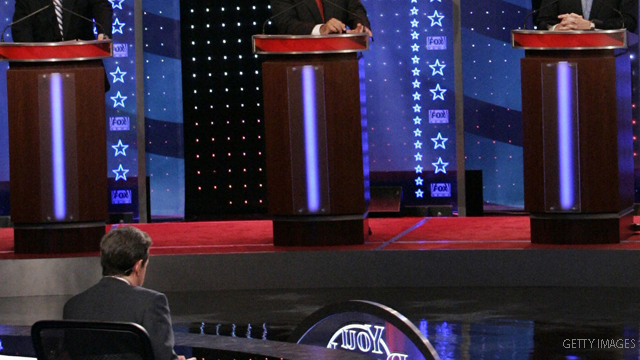 Only five probable GOP White House candidates will be on stage at Thursday night's debate being put on by Fox News and the South Carolina Republican Party, another sign of the slow start, compared to the last two cycles, to the start of this race for the White House.

The debate will most likely also be overshadowed by continued media coverage of the killing of Osama bin Laden, including a visit just hours before the debate by President Barack Obama to Ground Zero in New York City.

A more impressive list may be who's not attending. Among the probable presidential candidates not coming to Greenville are former Massachusetts Gov. Mitt Romney and former House Speaker Newt Gingrich. Indiana Gov. Mitch Daniels, former U.S. Ambassador to China and former Utah Gov. John Huntsman, and Rep. Michele Bachmann of Minnesota won't be there either, but they haven't decided yet on whether they'll run for their party's presidential nomination. It's the same story for former Arkansas Gov. Mike Huckabee, who appears near or at the top of most of the early 2012 GOP horserace polls, but who hasn't decided yet on whether he'll make another bid for the White House.

Add Donald Trump to the list. The billionaire businessman, real estate mogul and reality TV star says he'll decide by June if he's going to launch a presidential campaign. And Sarah Palin won't be there either. The former Alaska governor and the 2008 GOP vice presidential nominee has not taken any serious steps towards running for the White House, but she hasn't ruled out a run.

Other than Paul, who cracks double digits in some of the national horserace polls, the rest of the contenders at the debate are all in the single digits. And other than Pawlenty, and to a lesser degree Santorum, none of have put together a strong team of advisers and foot soldiers in the early primary states.

Pawlenty, in an op-ed in the Daily Caller Thursday, says the reason some candidates are skipping the event is because "they believe it's 'too soon' to begin the presidential campaign against Barack Obama. I only hope that it's not too late."

He may be right, or he may be off by a few weeks or months.

The reason there will only be five candidates, and none with a ton of star power, on the stage: The field is still not set. Only Johnson has formally declared himself a candidate for president. Until Daniels, Huntsman, Huckabee and Trump decide their intentions, the field won't be defined.

"With South Carolina's GOP presidential primary less than 10 months away, it's time for state residents inclined to vote on that ticket to start deciding on a candidate to support. Unfortunately tonight's debate won't help many of them firm up their choice," says an editorial in the Greenville News.

Why the slow start?

Many feel the last two cycles started too early. The lack of a true GOP front runner in the polls this time around also negates the need for others to jump in before it's too late. And the Republican party's big victories in last year's midterm elections put the spotlight on the GOP congressional leaders, rather than the race for the White House. Add to that the uncertainty of how the new player in the GOP field, the tea party movement, will affect the campaign.

The first presidential debate of an election cycle usually marks the real beginning of the campaign. This time around it looks like we may have to wait a little bit longer.