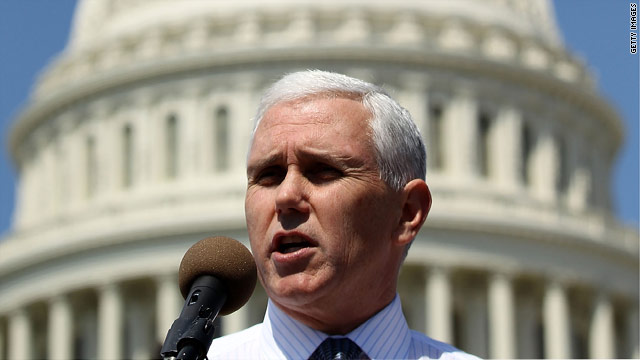 It's official: Pence running for governor

(CNN) – Indiana Rep. Mike Pence announced Thursday he is running for governor of his state, a widely expected move after the popular conservative decided not to run for president earlier this year.

"Over the past several months, we've traveled across this state, meeting with people in every walk of life. We've listened and learned where Hoosiers think we might best serve Indiana in the years ahead," Pence said in a web video announcing his candidacy. "I've been humbled by the outpouring of encouragement we've received from people across this state... and it's for that reason today, I'm announcing my candidacy for the Republican nomination for governor of Indiana in 2012."

Pence, the five-term congressman from Indiana's 6th Congressional District, considered a presidential bid last year and appeared to be the early favorite among social conservatives. But despite lobbying from some leaders within the GOP, he announced in February that he would not seek the presidency this cycle, leading many to speculate he instead had his eyes on the Indiana State House.

"To keep Indiana growing, Hoosiers know we must have principled leadership at every level to make the right choices," said Pence. "We need to live within our means, and embrace policies that will create good jobs, great schools, safe streets and strong families."

Democrats have yet to field a candidate, though former Indiana House Speaker John Gregg has indicated he is interested in running.

Meanwhile, Indiana Democrats are painting Pence as a creature of Washington.

"Congressman Mike Pence loves Washington, so much so that he made his campaign announcement from there instead of heading back to the heartland and standing with the Hoosiers he wants to represent," Indiana Democratic Party Chairman Dan Parker said in a statement. "Congressman Pence has spent a decade in Congress focusing on divisive issues rather than working for the people of Indiana."