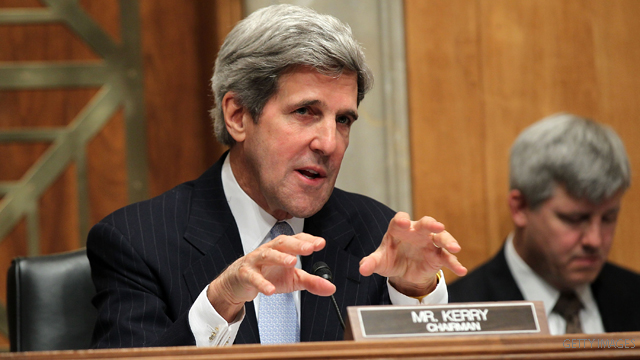 Washington (CNN) - The fact that Osama bin Laden was found in Pakistan continued to be a hot topic on Capital Hill on Thursday among lawmakers from both chambers and both sides of the aisle.

At a Senate Foreign Relations Committee hearing that was planned before the death of bin Laden, Committee Chairman John Kerry, D-Mass., asked what seems to be on everyone's mind.

"Who did they think was living behind those 15-foot walls? Was there any level of curiosity?" asked Kerry. "How could bin Laden have gone undetected living next door to Pakistan's equivalent of West Point?"

Reexamining the relationship between the United States and Pakistan has been a common theme among lawmakers this week. Some suggest cutting off funding to the country since learning of bin Laden's location, but most offer a more strategic perspective.

"The fight against al Qaeda and other extremist groups that threaten the United States and our allies is far from over," Kerry said.

"Going forward we have to act thoughtfully and no matter what we have to remember the big picture and the larger strategic interest and the full nature of our relationship with Pakistan. We should not rush into a situation that hurts our own interests," he said.

Across the aisle, Tennessee Republican Sen. Bob Corker agreed, saying that a new approach toward Pakistan is needed.

"We need to alter our bilateral relationship but not from the standpoint of just ending aid or that kind of thing and by the way I've felt that for some time and if you want to paraphrase what Senator Kerry said, Pakistan acts very irrational," said Corker. "They don't act rationally in terms of their strategic interests and so for some time I've felt that we should alter and look at this aid in a very different way and so I look at this as an opportunity."

On the House side, Speaker John Boehner reaffirmed his view on the need to keep ties with Pakistan.

"Al Qaeda and its extremist allies have made Pakistan a target and the people of Pakistan have suffered deeply as a result. Taking on al Qaeda and radical extremism is absolutely vital to the interest of both of our countries so it's not a time to back away from Pakistan, it's time for more engagement with them not less," Boehner said.

Since 2002 the United States has given approximately $20.7 billion to Pakistan with over $14 billion of that amount going toward security in Pakistan.