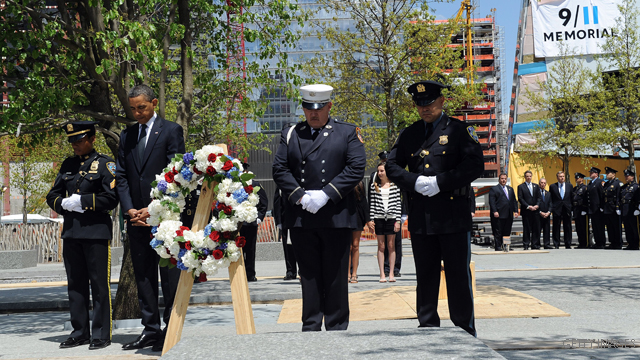 President Barack Obama will meet with survivors and family members of those killed in the worst terrorist attack in U.S. history Thursday, days after American commandos killed the leader of the group behind that massacre.

2:49 p.m. - According to the White House pool report, the wreath used by he president was supplied by Flowers of the World, which had a shop on the ground floor of 4 World Trade Center before 9/11.

2:42 p.m. - Marine One landed at FJK airport. The president strolled quickly from the chopper chopper and saluted before jogging up the steps of Air Force One.

2:22 p.m. - Obama is in the motorcade rolling to the Marine One landing zone.

1:35 p.m. - The president is participating in a private meeting with approximately 60 9/11 family members. The families were selected in consultation with the National 9/11 Memorial staff.

1:17 p.m. - The president is in the motorcade departing Ground Zero, en route to a closed press stop where he will meet with victims' families.

Uniformed officers from the FDNY, NYPD and Port Authority lined the president's path before he placed the wreath at the foot of the Survivor Tree, planted at the Memorial in December 2010. The tree was discovered and freed from the piles of rubble in the plaza in October 2001.

12:50 p.m. - The president's motorcade departed the police station and is en route to Ground Zero.

12:47 p.m. - Obama, Giuliani and NYPD commissioner Ray Kelly greet uniformed police officers at the precinct. The president talked about those lost on 9/11, saying "We keep them in our hearts. We haven't forgotten."

12:45 p.m. - @edhenrycnn: @JohnKingCNN just noted NY has generations of firefighters and cops the way Midwest families had generations of auto workers - so true

12:45 p.m. - @edhenrycnn: thinking about the Vigiano family from my hometown of Deer Park, NY - they lost two sons, both first responders

12:34 p.m.- Obama and Giuliani arrive at a New York Police Department precinct in lower Manhattan. The First Precinct covers the World Trade Center and Ground Zero area and was first to arrive at the scene on 9/11.

12:26 p.m. - Chief Edward Kilduff of the New York City fire department said the president and former Mayor Giuliani had lunch with the firefighters at the fire house.

"The president connected well to the fire fighters," Kilduff said. "We're extremely appreciative the president was able to join us for lunch."

11:35 a.m. –– @edhenrycnn: President tells firefighters that courage of military and intel sends a msg that "when we say we never forget we mean what we say."

11:35 a.m. - Obama and Giuliani worked the line of firefighters at the firehouse before Obama spoke to the group. He said he decided to make the trip to thank them "from the bottom of my heart," but added nothing can be done to bring back the friends we lost.

"I just want to let you know that you're always going to have a President and an administration who’s got your back the way you’ve got the backs of the people of New York over these last many years," Obama said.

11:24 a.m. - Obama visits Engine 54 firehouse in New York that lost 15 men on 9/11. He will deliver informal remarks to firefighters and view a bronze memorial plaque commemorating the men.

11:13 a.m. - The president is in the motorcade and departing the landing zone.

10:55 a.m. - Obama disembarked Air Force One at JFK airport in New York with a wave before rushing over to shake hands with a group of people assembled by the plane. He then boarded Marine One.

10:45 a.m. - White House Press Secretary Jay Carney briefed reporters aboard Air Force One en route to NYC, according to the pool report. He said Obama thinks it's "appropriate and fitting" to visit New York to recognize the city's loss on September 11, 2001. Carney said the trip is an effort to help New Yorkers and Americans achieve a sense of "closure."