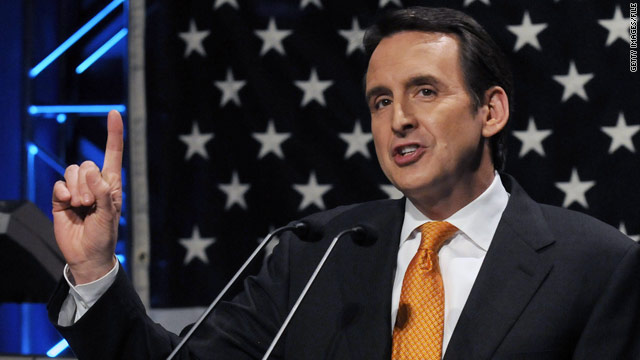 GOP insiders consider ex-Minnesota Gov. Tim Pawlenty to be the top tier candidate among those at the debate.
May 6th, 2011
12:08 AM ET

Greenville, South Carolina (CNN) – The handful of Republican presidential candidates who showed up in South Carolina on Thursday for the first presidential debate of the 2012 election praised President Obama for hunting down Osama bin Laden, but they quickly took sharp aim at the rest of foreign policy record.

“I do congratulate President Obama for the fine job that he did in making the tough call and being decisive as it related to finding and killing Osama bin Laden,” said former Minnesota Gov. Tim Pawlenty, considered by many GOP insiders the only top tier candidate among the five who appeared in the debate, which was sponsored by Fox News and the South Carolina Republican Party.

“I tip my cap to him in that moment,” Pawlenty said of Obama’s decision to send a team of Navy SEALs into Pakistan to target bin Laden. “But that moment is not the sum total of America's foreign policy. He's made a number of other decisions relating to our security here and around the world that I don't agree with.”

With leading Republican figures like former Massachusetts Gov. Mitt Romney and former House Speaker Newt Gingrich passing on the debate, Pawlenty shared the stage with a quartet of candidates who face long odds at capturing the GOP nomination.

Among them was former Pennsylvania Sen. Rick Santorum, who has spent more time in South Carolina than any other candidate but was forced to explain Thursday why he lost his 2006 re-election bid by 18 points.

Santorum, who was a member of the Senate Armed Services Committee during two terms in Washington, said the president’s overall foreign policy strategy has been marked by dithering in places like Libya, Egypt, Honduras and Iran.

Santorum said Obama made the correct “tactical” decision to go after bin Laden, but said the president’s successes are owed to his predecessor, George W. Bush.

“If you look at what Obama has done right, it has always been a continuation of Bush policies,” Santorum argued, crediting the former president for launching the hunt for bin Laden and opening the prison camp at Guantanamo Bay.

Texas Rep. Ron Paul, a libertarian hero and longtime critic of America’s foreign policy, blasted the continued presence of American troops in Afghanistan as a waste of precious financial and human resources.

He said bin Laden’s death should force the White House to “reassess” the Afghanistan mission.

Also on stage were Herman Cain, the former CEO of Godfather’s Pizza and a onetime radio host who has developed a following among Tea Party activists but still barely registers in most national polls, and former New Mexico Gov. Gary Johnson, a libertarian whose stances in favor of marijuana legalization and open borders are anathema to many Republican voters.

The Greenville News editorialized Thursday morning that the debate field was “lackluster” and left GOP voters without a good opportunity to evaluate the field.

That criticism was echoed by some Republicans both before and after the debate.

“I thought that everybody on the stage had strengths that appealed to certain parts of the Republican base,” said South Carolina GOP consultant Chip Felkel, who was working for Mississippi Gov. Haley Barbour before he decided against running for president last month. “ Pawlenty looked like the one guy on stage who might be able to pull the key groups together into a coalition that might be successful.”

The moderators, though, made a point of asking each participant about the candidates who decided to skip the event.

Pawlenty was questioned about the health care plan enacted in Massachusetts under Romney, legislation that Pawlenty has often criticized, albeit indirectly.

“Well, Governor Romney is not here to defend himself so I'm not going to pick on him or the position he took in Massachusetts,” Pawlenty said before hinting strongly that the Romney plan resembled the “centralized limited choice, limited option” health care law signed by President Obama.

Debate organizers held out hope that Romney would join the debate field, but this week a senior Romney adviser said the former governor would skip the debate because “the field is too unsettled and he's not yet an announced candidate."

The event also lacked two potential candidates who could shake up the early race if they decide to run: former U.S. ambassador to China and former Utah Gov. Jon Huntsman and Indiana Gov. Mitch Daniels, both of whom are seriously thinking about the race but are still finalizing decisions.

Several top Republicans insisted that the meager showing did not detract from the significance of the event.

Instead, they said the debate was only the first step in an eight-month trek to the Iowa caucuses, the first event of the Republican nominating process.

“It’s a work in a progress,” Republican National Committee Chairman Reince Priebus said of the GOP field. “This is a long process. They will have plenty of time to make their case.”

South Carolina Gov. Nikki Haley, who backed Romney in 2008 as a state legislator and whose prized endorsement up for grabs in 2012, would not criticize any of the absentee candidates but said they should make appearances soon or risk damaging their chances in the state.

"The candidates that are here have said that they understand that South Carolina is important," Haley told reporters after addressing a Greenville Tea Party rally earlier in the day.

South Carolina Sen. Jim DeMint, whose endorsement will also be critical in the GOP race, said he was underwhelmed by the show.

“I would have liked to hear more on the debt, the economy,” DeMint told reporters. “We’re going to see the candidates develop their pitch a little better” as the race goes on, he added.