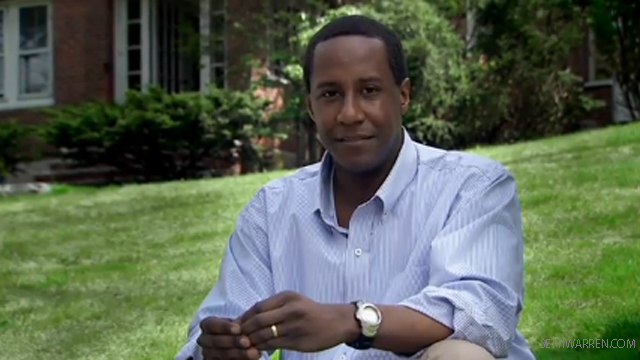 Washington (CNN) - Add another name to the list of Democrats determined to oust Republican Massachusetts Sen. Scott Brown from his seat.

On Monday, Newton Mayor Setti Warren announced he will run against the first-term Republican in next year's Senate race. The Democratic mayor unveiled a web video that was part personal biography, part anti-Brown attack ad.

"Many of you don't know me. I'm probably about as well known as Scott Brown was at this point two years ago," Warren said while sitting on the lawn in front of his family home.

He continued by talking about his family, military service as an intelligence specialist in Iraq and political experience as the liaison for cabinet affairs in the Clinton administration and previous work for Sen. John Kerry, D-Massachusetts.

Yet despite soft, soothing music playing underneath his words, Warren lashed out at Brown.

"I believe Scott Brown is an honorable man," Warren said. "But he has not been the independent voice in the Senate that so many expected him to be. He's voted 87-percent of the time with his national Republican leaders."

The mayor blasted the senator, for what he defined as, extending the Bush tax cuts for "wealthy Americans," opposing efforts to save the jobs of middle class workers, and weakening regulations on big banks.

"Scott Brown admits that he doesn't think about his own life when he votes against the very same programs that helped lift him, as a troubled teen, out of poverty," Warren continued. "Well that goes to the core of why I'm running. We can never forget the sacrifices that others made on our behalf."

"It looks like there will be a very crowded Democratic primary, but the election is still 18 months away and Scott Brown's focus in the near term will continue to be on creating jobs and reducing spending," said Brown campaign spokesman Eric Fehrnstrom.

Two other Democrats previously announced they will also challenge Brown. The interest in challenging the senator comes despite Brown consistently polling well in Massachusetts.

Warren was elected in 2009, the first African-American to win a mayor's race in Massachusetts. The Boston Globe reports that some of his constituents are grumbling that Warren should serve out his full term as mayor before seeking a higher office.