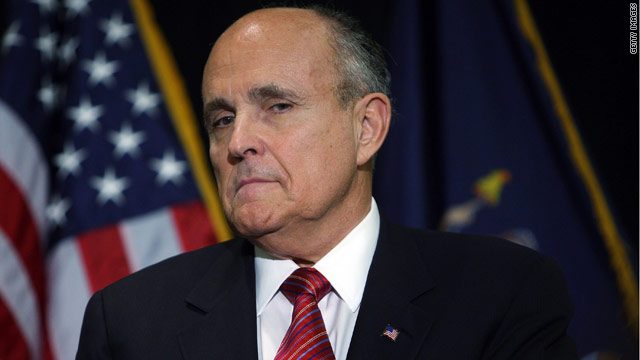 Giuliani on Gingrich and 'the' question for Obama's 2012 run

(CNN) - Former New York City Mayor Rudy Giuliani deflected the 2012 spotlight from himself and toward soon-to-be presidential candidate Newt Gingrich late Monday, saying, "I think he is going to add a tremendous amount of intellectual heft to this debate."

During an interview with CNN's Piers Morgan he was questioned about his reaction to Gingrich's tweet that he will announce Wednesday, and what it means for him, a 2008 presidential candidate and a rumored hopeful for 2012. Giuliani responded, "I don't know when you are going to hear about me, because I haven't really decided or focused on it yet. I'm glad that Newt has joined the race. I admire Newt Gingrich very much."

"He is one of the smartest people in America," he added.

And Giuliani's admiration crosses party lines, especially when it comes to the president. The day after the death of terrorist Osama bin Laden was announced, Giuliani, who was mayor during the 9/11 attacks, openly commended President Obama's actions.

"I admire the courage of the president to make a decision like this because if something had gone wrong everyone would be blaming him," he stated, without forgetting Obama's predecessor, George W. Bush, whom he said also "deserves tremendous credit."

Giuliani echoed those comments while discussing his visit to Ground Zero with the president last Friday. "When a president makes a correct decision, particularly one like that, he deserves all the credit for it," he said.

"I told him I really admired his decision because he knew that any mistake there and he was going to be the one responsible for it…sure, I think this makes him politically stronger."

But the former NYC mayor countered that the focus of the presidential election will not be centered on foreign policy, where Obama may have received an image boost.

"The election is over a year away," he said. "A lot of other things are going to happen between now and then. The economy is a big factor in any of our elections. Foreign policy is - when we're going through something like this and we're all focused on it."

"But by and large, American elections get decided on the economy. And I think that's going to be the question for President Obama: what kind of shape is the economy in next year."