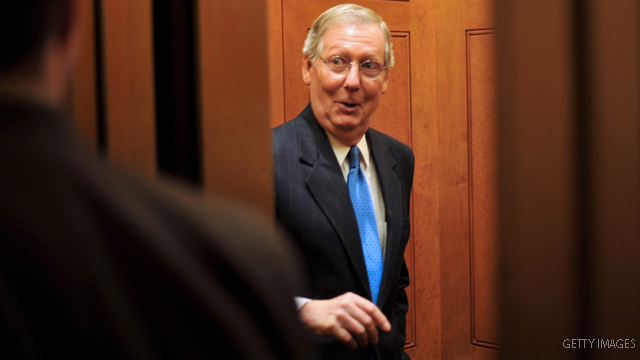 Washington (CNN) - Senate Republican Leader Mitch McConnell dismissed the importance of the so-called "Gang of Six" bipartisan talks, saying he does not believe the group of senators will come up with a deficit reduction plan to pair with increasing the debt ceiling.

"With all due respect to the Gang of Six, or any other bipartisan discussions going on this issue, the discussions that can lead to a result between now and August are the talks being led by Vice President Biden," said McConnell, of Kentucky.

The blunt words will hardly be welcome news to the senators who have been meeting for months behind closed doors, searching for a bipartisan way to reduce the deficit by $4 trillion dollars over 10 years.

The original goal of the group was to find common ground to reduce the deficit, with that reduction not connected to raising the debt ceiling.

But negotiations have gone on since January without a breakthrough. And now, new Biden-led deficit reduction talks with congressional leaders – with those talks having the urgent goal of increasing the debt ceiling - seem to have overshadowed the Gang of Six talks.

When asked by CNN if he thinks those discussions and the work they have done is now irrelevant, McConnell said "I commend them for their efforts," but he made clear that he believes the discussions that matter are those where House and Senate Democrats and Republicans are represented, as well as the White House - which he called critically important, noting that the president is "the only American out of 307 million of us who can sign a bill into law."

McConnell's remarks were in response to a question from CNN about the fact that sources familiar with the Gang of Six talks say they are discussing getting rid of some tax loopholes and expenditures, which many Republicans call tax increases.

McConnell, like House Speaker John Boehner, R-Ohio, has made clear he will not support any deficit reduction deal to increase the debt ceiling that includes tax increases.

Last week some sources suggested that talks had stalled because of differences over taxes, as well as how to rein in entitlement spending.

Durbin told CNN Tuesday reports that negotiations are in trouble are “inaccurate,” but - like other members of the negotiating group - said he could not give a time frame for when they could produce any deal.