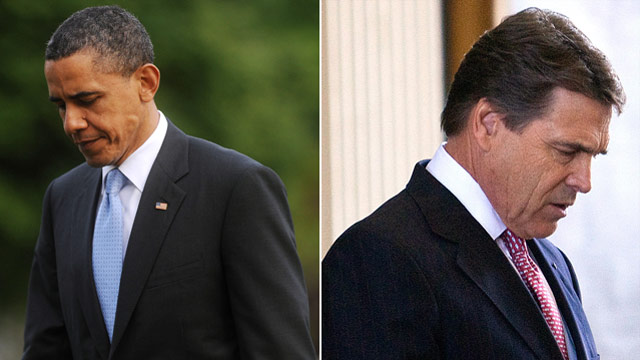 Perry and Obama take a pass on meeting

(CNN) –Texas Gov. Rick Perry will not meet with President Obama Tuesday when he travels to the Lone Star State. Obama is scheduled to deliver remarks on immigration in El Paso and headline two fundraisers in Austin Texas, but he will not visit with the governor. And in a classic case of he-said, she-said, it's unclear who is refusing to meet with whom.

Perry has been outspoken about his displeasure with the president's refusal to sign a disaster declaration for the wildfire-plagued state and turned down an offer to meet Obama at the airport, according to White House spokesman Jay Carney.

He spoke of the administration's overtures toward the put-out Perry en route to Texas on Air Force One, saying, "We invited him to meet with the President and he declined the invitation. We have also, in the past, offered him a National Security Council briefing on immigration. He declined that as well."

But a spokesperson for the Republican governor, Elizabeth Frazier, offered a slightly different account.

"We tried to arrange something," she said. "The president had offered a greeting on the tarmac in El Paso. The governor was not able to do that."

"We did offer to meet or greet with him when he arrived in Austin for the fundraiser," she continued, "Or to arrange a tour over areas affected by the wildfire, and the White House declined."

When asked if the greeting in Austin was coupled with the tour, she said, "Either/or."

The Federal Emergency Management Agency has approved 25 grants to assist the state of Texas with battling wildfires that have damaged an area greater than the size of Rhode Island and Delaware combined. But Perry insists the state needs a federal disaster declaration to clear the way for additional federal aid.

"Right now the governor's priority is the wildfire," Frazier affirmed.

"He believes the federal government should approve his request for federal disaster relief. Meeting with the president, that would have been a top priority. Meeting with him in Austin or a brief greeting, we did offer that or to arrange a tour."