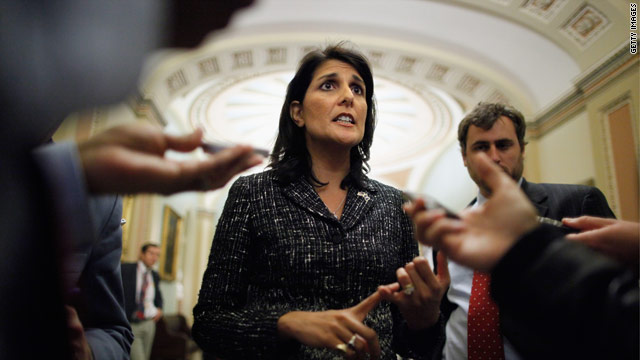 The NLRB complaint alleges that Boeing decided to build a new 787 Dreamliner plant in South Carolina, a so-called "right-to-work" state, in retaliation against union workers in Washington state who had engaged in past strikes.

The Republicans took turns condemning the White House for allowing a board of Democratic appointees to wield control over how American companies do business.

"This is an issue that may have started in South Carolina, but we want to make sure it never touches another state," said Haley, who flew to Washington for the press conference at the U.S. Chamber of Commerce. "We are demanding that the president respond to what the NLRB has done. This goes against everything we know our American economy to be."

The White House has been largely silent on the matter, saying that the NLRB is "an independent agency" conducting its own enforcement actions.

Tennessee Sen. Lamar Alexander and Kentucky Sen. Rand Paul also took turns questioning the NLRB's activities, with Paul going so far as to suggest that the White House has "an enemies list."

Alexander said he plans to finalize language later Tuesday on the "Right to Work Protection Act," which would protect right-to-work states from federal intrusion over labor disputes.

Graham called the NLRB complaint "absurd" and accused the administration of having a double standard toward Boeing because White House chief-of-staff Bill Daley is a former member of the company's board.

And DeMint used some of the toughest language of all, blaming the Obama administration for pushing the NLRB's "thuggery."

"This is something that would happen in a third world county, not in America," DeMint said of the NLRB action. "I can't believe the administration is sitting on the sidelines pretending they had nothing to do with it."

“This fight is about far more than just one group of workers in Washington State," Harkin said in a statement. "Unions are one of the few voices left in our society speaking up for the little guy, and if we let powerful CEOs trample all over these rights without consequences, we might as well give up on having a middle class altogether.

"That’s what this all comes down to: powerful corporate interests are pressuring public officials to interfere with an independent agency, rather than let justice run its course," he added.