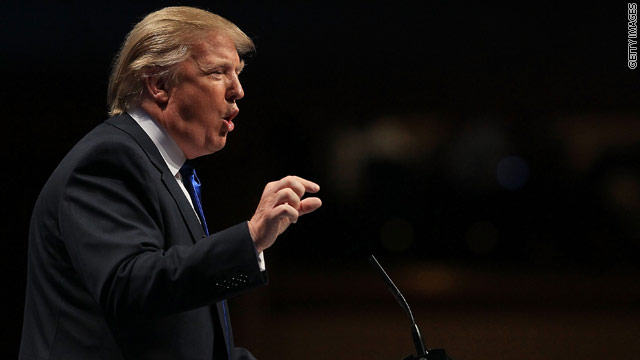 A serious Trump turns up in New Hampshire

(CNN) - Potential 2012 presidential candidate Donald Trump took a departure from his sideshow topics Wednesday to tout his past remarks on Osama bin Laden, weigh in on the budget negotiations and assess his chances of moving into the White House.

During his second trip to the early presidential contest state of New Hampshire, the famously confident Trump said he appeared on television "a few weeks ago" saying bin Laden was in Pakistan but that "nobody else picked it up."

"You tell them (Pakistan) we're not giving you any money unless you hand over to us Osama bin Laden and everybody looked at me like eh, nobody else picked it up," Trump told a crowd at the Chamber of Commerce Nashua Expo. "That's what I hate about politics. You know when I buy a piece of real estate I own it, OK? When you come up with a good idea in politics, if they like it they take it and they say I have an idea and you know, by that time most people forgot it was Trump's idea so Trump doesn't get any credit. I love to get credit."

He criticized the handling of bin Laden's body after the U.S. Navy SEAL team killed the al Qaeda leader, action that he said was aided by enhanced interrogation techniques.

"So we catch this guy, they shoot him, then they clean his body, they give him a religious ceremony … Why? I don't understand it," Trump said.

The reality TV star was also disapproving of the strategy behind the GOP budget plan proposed by House Budget Committee Chairman Rep. Paul Ryan, the politics of which he said were faulty, causing Democrats to do "a number on that plan like I've never seen."

"I would not have done it the way he did it. Too early, too soon, there was no reason for him to do it," Trump said. "There's no reason for it so Medicare and Medicaid all of the sudden come in and it's put in by Republicans and you've got elections to win."

To bolster his point, the real estate mogul cited the special election in New York's 26th district that is by all accounts a close race between a Republican, a Democrat and an independent Tea Party candidate.

"She's having a hard time defending that whole situation with Medicare," Trump said.

And it is because he breaks with his party, that he thinks it will be a tough road if he decides to run for president. Trump has said he will make an announcement by June after the current season of "Celebrity Apprentice" wraps in May.

"We have tremendous potential, tremendous, unbelievable potential if we had the right people, if we knew what we were doing," Trump said.

And the right people for negotiations with China and South Korea are not always nice people, Trump said.

"We aren't using our smartest, greatest business people," Trump said. "Instead we use a diplomat … You know what a diplomat is? It's a person that studies how to be nice. I don't want a nice person. And that's why I may not make it in terms of getting, I'm not a nice person. But I'll tell you what, I'd make this country great again."