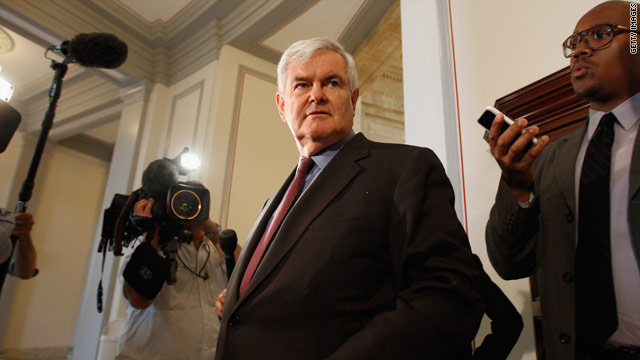 Washington (CNN) – After launching his presidential campaign Wednesday, Newt Gingrich can add "presidential candidate" to the long list of positions and jobs he has held since leaving public office a dozen years ago.

The former Georgia Republican congressman, who now lives in Virginia, holds no fewer than 25 current titles, positions, and occupations, according to a review of public records and filings as well as his various official biographies.

Many of these are advisory positions with non-profit or public interest organizations, but others are likely to comprise a significant portion of the former speaker's annual income.

Gingrich is the chairman and CEO of The Gingrich Group, a communications and consulting firm founded in January 1999, shortly after the speaker left Congress. The firm says on its web site that it specializes in "transformational change." One of the speaker's first clients was Freddie Mac, according to the federal mortgage lender's company listing in the Hoover's business directory.

The Gingrich Group is located in a K Street office building in downtown Washington, DC, that is also home to several other Gingrich-themed ventures. These include Gingrich Holdings, Inc.; Gingrich Productions, a production company headed by the former speaker's wife, Callista; Gingrich Communications, a firm headed by his daughter Kathy Gingrich Lubbers; the Center for Health Transformation, a health policy organization founded by the former speaker; and American Solutions for Winning the Future, a 527 political organization which handles some of his political activities. Gingrich's federal political action committee of the same name lists its address in Alexandria, Virginia.

The 527 group had a total income of $14.5 million in 2009, with $1.2 million in expenditures. Gingrich did not draw an income from the group, though he spent roughly 16 hours a week working there, according to IRS tax filings.

Gingrich's income from the other companies is not available. As a private citizen, Gingrich was not required to disclose his annual income or income sources. However, as a presidential candidate, he will be required to detail his personal finances in mandatory disclosure reports.

One source of income that has likely been very lucrative in the past stems from his role as a paid public speaker. His official biography says that Gingrich "has become one of the most highly sought-after public speakers, accepting invitations to speak before some of the most prestigious organizations in the world."

Gingrich commands at least $40,000 per speech, according to the Washington Speakers Bureau. The former speaker's exact speaking fees are not known, but as a point of reference, former president Bill Clinton has averaged $178,000 per speech since leaving the White House, according to a CNN analysis.

The former speaker also likely draws royalties from the 23 books he has authored or co-authored, 13 of which were New York Times best-sellers, according to his office.

Gingrich, who holds a Ph.D. in modern European history, has also been active with policy think tanks and educational institutions. He is a senior fellow at the American Enterprise Institute, a visiting fellow at the Hoover Institution at Stanford University, and a visiting scholar and professor at the National Defense University.