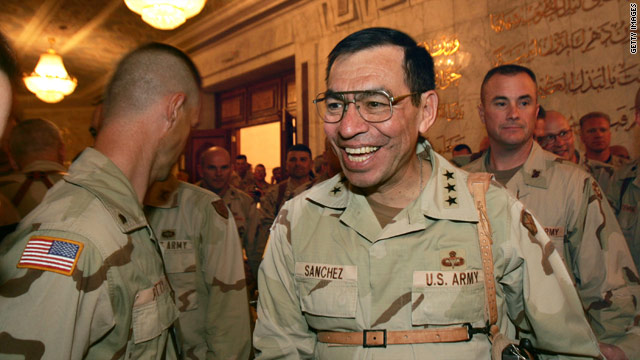 Will retired general have the firepower to defeat GOP in Texas?

(CNN) - Democrats haven't won a major statewide election in Texas in more than 20 years. But they hope that retired Lt. Gen. Ricardo Sanchez's announcement that he's running for the Senate in 2012 will break the Republican party's streak in what's considered a very solid red state.

Sanchez filed paperwork in San Antonio Wednesday to launch a Democratic bid for the open Senate seat currently held by Republican Sen. Kay Bailey Hutchison, who announced in January that she would not run next year for a fifth term in office.

While he did mention his longtime service to his country in a written statement, Sanchez emphasized economic issues in his comments.

"Here in Texas, too many families are struggling to get ahead. Jobs are hard to find, our schools simply aren't good enough and increasing food and gas prices are breaking household budgets. We need to make sure small businesses that drive the economy can grow and prosper. Unfortunately, Washington is mostly focused on scoring partisan points and winning elections," said Sanchez.

National Democrats are optimistic that they can win in Texas. Last month Sen. Patty Murray of Washington, the chair of the Democratic Senatorial Campaign Committee, announced that the Lone Star state was one of the "Six in '12" states that Democrats were targeting in 2012, and added that Democrats were close to announcing a candidate in Texas.

A few days later, Democratic Party sources confirmed to CNN that the retired three-star general was expected to run for the Senate. At the time, Sanchez told CNN Pentagon Correspondent Barbara Starr that "I am humbled by all the speculation. I am still considering the possibilities."

Last month, a Democratic source told CNN that with his centrist, military background, "no one is going to call Sanchez a liberal." The source also pointed out that Sanchez, a Mexican-American who is a native of Rio Grande City, Texas, is well suited to "capture the surging Hispanic demographic" in the state, which could be more motivated to cast ballots with President Barack Obama on the ballot next year.

But national Republicans are confident the seat will stay in party hands.

"Our confidence in this race comes down to the simple fact that Texans do not support Barack Obama's liberal, tax-and-spend agenda and whoever the Democratic nominee ultimately is, that individual will be campaigning side-by-side at the top of the ticket next year with President Obama, " says National Republican Senatorial Committee Communications Director Brian Walsh, in a statement. "So we'll leave it to national Democrats to crow about their latest hand-picked candidate because as any observer of Texas politics knows, we've heard it all before and we have no doubt this seat will remain in Republican hands."

Sanchez does come with some potential baggage. He was the top U.S. military commander in Iraq in 2003 and 2004. The abuse of Iraqi prisoners at the Abu Ghraib prison happened on his watch. While Sanchez emphasized that he had no knowledge of the actions at the prison, the controversy tainted him and effectively prevented any chance at promotion. Sanchez retired from the Army in 2006.

In his statement, Sanchez said he will make a more formal announcement in the coming weeks.

A number of big-name Republicans are running for the seat. Among them is Lt. Gov. David Dewhurst, who is considered by many to be the favorite for the GOP nomination as well as the general election. Among others making bids are former Texas Secretary of State Roger Williams, who is endorsed by former President George H.W. Bush, Texas Railroad Commissioner Elizabeth Ames Jones, former Railroad Commission member Michael Williams, Dallas Mayor Tom Leppert and Ted Cruz, former solicitor general of Texas.

Sanchez's move is the second major recruiting announcement this week for Senate Democrats. Monday Rep. Joe Donnelly of Indiana announced a bid for the Senate seat held by Richard Lugar. The six-term Republican senator is running for re-election next year, but is facing a primary challenge from a more conservative candidate, Indiana State Treasurer Richard Mourdock, who announced his bid on February 22.

Democrats currently have a 53-47 majority in the Senate. They are defending 23 seats (21 Democrats and two independents who caucus with the party) next year, with the GOP defending 10 seats.