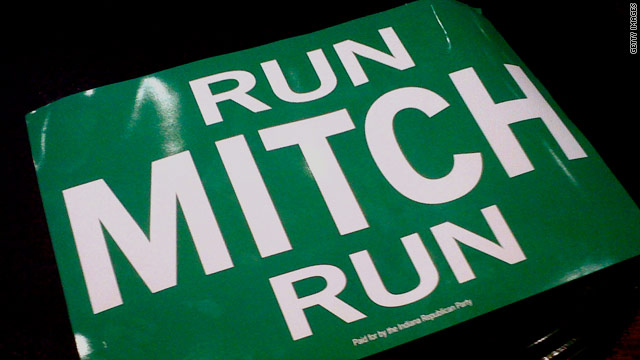 Daniels answered the frenzy in his typical self-deprecating fashion: with a joke about his diminutive stature.

Riffing on the current field of Republicans "jockeying" for position in the presidential race, the 5-foot-7 Daniels remarked, "I really like my chances."

"Because if anybody is made for jockeying," he added, "it's me."

But the main driver of presidential buzz Thursday was the night's headline event: a rare speaking appearance by Indiana's famously reticent first lady, Cheri Daniels, who has become a focal point in the drama surrounding her husband's presidential intentions.

Daniels has said his family weighs heavily on his mind as he contemplates stepping onto the national stage, and the couple's dramatic past - they divorced and then re-married after Cheri left him for another man in the mid-1990s - figures prominently in his thinking.

Cheri Daniels spoke briefly with reporters after her speech, which avoided political themes and focused primarily on her adventures milking cows and cooking with Spam at county fairs around the state.

"We are talking, we are having a lot of talks," she said of the deliberations with her husband. "It's not just me. I have four daughters and we have three sons-in-law, and everyone has a voice. We are still talking. You have good days and bad days. One day you feel one way and another day you feel different."

Asked how the heightened attention on their marital past affected her thinking about the race and her speech Thursday, she said, "It made me more nervous than I would normally be."

But before she could continue, an aide grabbed the first lady and led her away from the press.

The governor, meanwhile, entertained a seemingly endless volley of questions about his intentions.

On a near daily basis, Daniels confounds political observers with some new mysterious statement about the presidential race. Asked once again about a possible bid on Wednesday, Daniels responded: "Maybe I could do that, maybe someone else could do it better."

And surrounded by local and national reporters after the spring dinner, he continued to tiptoe around the topic of his future.

He said the fresh round of newspaper stories about his marriage were having "no effect really" on his thinking. He also said entreaties from supporters to jump in the race have ramped up in recent days.

The main barrier to entry, he said, is convincing himself that his family can survive the gauntlet of a national campaign.

"You have to decide if this is really the way you want to spend maybe the rest of your life, and is it the right thing for your family," he said. "I always thought I would like to make some contribution to bend the course of events, but there may be other ways to do it."

Advisers to the governor insist he is being sincere when he says he remains undecided about the race. But if he pulls the trigger, they say, he will have the fire in the belly to mount a serious campaign.

"The thing to know is if he runs, he is confident he would get the nomination," one Republican close to the governor told CNN Thursday.

At least one prominent Indiana Republican said Thursday that a Daniels campaign is all but certain.

"I now believe it is more likely than not that Gov. Daniels will be a candidate for president of the United States," said Kevin Kellems, a onetime adviser to former Vice President Dick Cheney and a veteran Indiana political operative.

Like most Republicans evaluating Daniels, Kellems said his prediction is based largely on instinct, since only Daniels truly knows what the future holds.

But, Kellems said, "If Mitch Daniels does run, he will be a formidable candidate - an assessment now clearly shared by both Republican presidential candidates and the president."