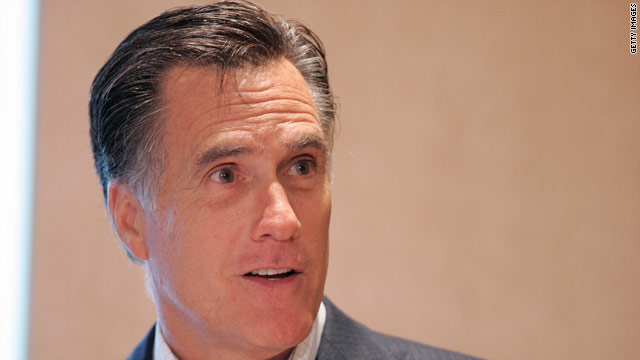 (CNN) – In a Thursday speech that was equal parts college lecture and campaign stump, former Massachusetts Gov. Mitt Romney issued a defense of the health care "experiment" he implemented while governor and slammed the Obama administration's health care reform law as a federal "power grab."

The potential GOP presidential contender said he would "issue waivers for all 50 states" to opt-out of health care reform on his first day in office should he be "lucky" enough to become president. He expressed the same sentiment in an op-ed for USA Today Thursday, which explicitly detailed his five-point plan.

Romney faced down criticism from fellow GOP hopefuls including former Pennsylvania Sen. Rick Santorum and former Arkansas Gov. Mike Huckabee, as well as possible questions from conservative voters whom he may rely on for support, should he choose to run. He opened his address at the University of Michigan in Ann Arbor with an explanation of how the Massachusetts plan differs from one-year-old health care reform.

He joked that some may ask "I heard that your plan in Massachusetts is a lot like President Obama's plan," and question why he's so anxious to repeal it. And Romney responded with a lesson in American history.

"The people in America are sovereign," he said, explaining that the framers decided "states would be the laboratories of democracy and compete with one another."

"I'm convinced that the Obama administration fundamentally doesn't believe in that American experiment," he continued. "They distrust that states are the ones with the power to decide."

Romney countered criticism by asserting that the Massachusetts plan was such an experiment. Though his action was "a plan for the state of Massachusetts," he described health care reform law as "a power grab by the federal government."

And according to Romney, the differences between his plan and Obama's are many, but similarities exist as well-and he's not willing to apologize for one of them.

Though he "respects" those who believe he should've taken a different course as governor and realizes that his explanation is "not going to satisfy everyone," he would not reject the individual insurance mandate included in the Massachusetts plan - the pesky similarity to federal health care reform that serves as fodder for criticism from both sides of the aisle.

"It wouldn't be honest," Romney said. "I, in fact, did what I thought was right for the people of our state."

The 2008 presidential candidate attempted to put distance between the president and himself, while moving closer to his base, by calling the health care reform law "an economic nightmare" and the reason "why this recession has taken to so long to move on from."

He also insisted that his reform would "share some of the objectives" of the plan proposed by House Budget Committee Chair Paul Ryan, which he touted as including choice, inserting market dynamics, and keeping Medicare solvent.

Romney's silver bullet solution to health care reform is to drive costs down by encouraging "the consumer to care about the cost and the quality" of their own health care and to "get health care to work like a market."

In the end, he's confident that voters will see it his way.

"If I am the nominee on the Republican side of the aisle and I get the chance to debate President Obama, this is what we're going to talk about," he said.

"I'm confident that the people will say the Mitt Romney U.S. reforms, that's a lot better than Obamacare."

One potential opponent for Romney wasted no time in issuing a response to his speech.

Santorum released a statement following Romney's remarks that criticized his "work to institute the precursor to national socialized medicine."

"We need leaders who believe in the American people again, not the power of government to solve our problems…the Governor had the right to implement Romney-Obamacare at the state-level, but that does not make it the right thing to do."