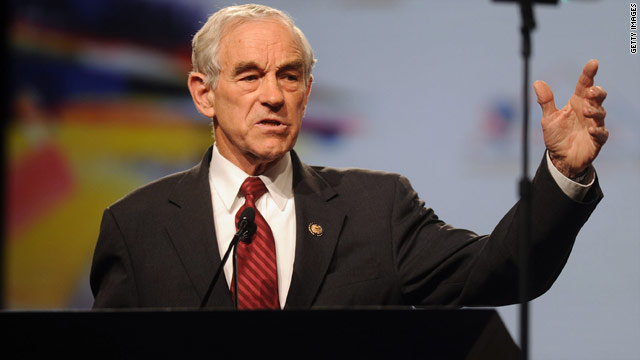 (CNN)-Saying "the time is right" because more people agree with his positions, Rep. Ron Paul of Texas on Friday announced his candidacy for the Republican presidential nomination.

The long-time lawmaker, who was first elected to the House of Representatives 35 years ago, says he's optimistic about his chances and that his "supporters are enthusiastic."

The 75-year-old Paul, whose libertarian views and outspoken criticism of American foreign and monetary policy has often put him at odds with the GOP, made his announcement on ABC's "Good Morning America." Paul is expected to repeat his announcement of candidacy later Friday at a campaign event in Exeter, New Hampshire, where he's also expected to receive several endorsements.

This is Paul's third bid for the White House. He ran as a libertarian in 1988 and for the Republican nomination four years ago. His campaign in the last presidential election raised eyebrows, thanks to the energy and enthusiasm of his legions of supporters, and thanks to his online fundraising prowess. He brought in millions of dollars in one- to two-day fundraising efforts - or so-called "money bombs."

When it comes to fundraising, it seems that Paul picked up in 2011 where he left off after he dropped out of the 2008 campaign. He raised more than $1 million in a 24-hour period last week, timed to coincide with his appearance at the first Republican presidential debate in Greenville, South Carolina.

Paul has hinted for months that he could launch another bid for the White House. His aides announced on April 14 that he had formed a "testing the waters" account and 12 days later announced the formation of an official presidential exploratory committee.

Paul made that announcement in Iowa, the state which holds the first contest in the presidential primary and caucus calendar. New Hampshire comes second on the calendar. After the event in Exeter on Friday, Paul is scheduled to attend a dinner in Lebanon hosted by the Grafton County Republican Party.

Paul generally holds a non-intervention stance when it comes to foreign policy, believing that the U.S. should avoid entangling alliances with other nations and avoid all wars not related directly to self defense of the country. Paul voted against the resolution authorizing the Iraq war. He also advocates withdrawing U.S. participation and funding from such organizations as the United Nations and NATO.

Paul has taken issue with the way the raid against Osama Bin Laden was carried out, saying that "we could have done it differently," and added that he would have carried out the mission to kill the founder and leader of the al Qaeda terrorist network in a different way than President Obama handled the situation.

But as for the killing of the man behind the 9/11 terrorist attacks, he says "I'm delighted he's gone."

On fiscal issues, Paul is a strong believer in free market principles and has called for abolishing the Federal Reserve. Thanks to his stance on economic issues, Paul enjoys strong support from many Tea Party activists. For two straight years, he's won the presidential straw poll at the Conservative Political Action Conference.

The most recent CNN/Opinion Research Corp. poll indicated that 10 percent of Republicans and independents who lean towards the GOP support Paul for their party's nomination, which places him fifth in the horse race. But the same survey also indicated that in a hypothetical 2012 general election head-to-head with Obama, Paul trailed by 7 percent, performing better than any other probable or possible Republican candidate.

Paul's son Rand, who like his father is a doctor, won election to the Senate from Kentucky last November. Earlier this year the younger Paul said there was a chance he would enter the race for the GOP nomination if his father didn't.

Rep. Ron Paul will appear on CNN's "The Situation Room" to discuss his 2012 candidacy for president Friday.