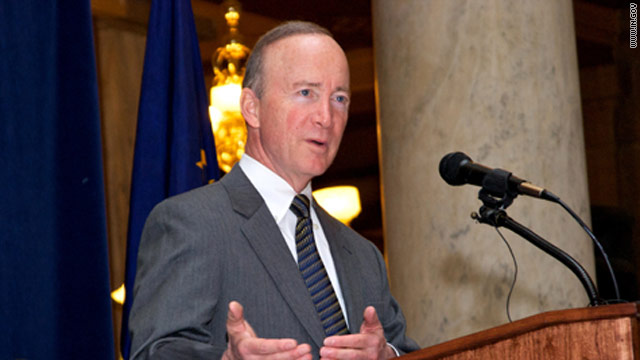 Ten years on, Daniels, now teetering on the brink of a presidential bid, is the repeated target of tongue-lashings from Rush Limbaugh, who this week blasted the "boring and moderate" Indiana governor as the favorite son of Washington elites who are out of step with today's conservative movement.

So which is it? Is Daniels a squishy middle-of-the-road dealmaker with little regard for Tea Party activists and social conservatives in his own party?

Or, as his supporters claim, is he a proven and brilliant conservative who just happens to be a really nice guy?

"His style is not to give a red-meat speech," said Al Hubbard, a longtime confidante to the governor who originally recommended Daniels for the budget post under Bush. "He is a problem-solver. Mitch is the kind of person who will identify the problems, prioritize them, and he will address them. I wouldn't say that it's moderate or conservative. It's leadership."

As Daniels nears a final decision on whether to enter the race for the GOP presidential nomination - some Iowa Republicans say he must join the race by the second week of June to build enough support before the pivotal Ames Straw Poll in August - his small but loyal team of advisers is eagerly highlighting his achievements in seven years as governor.

Few conservatives can quibble with his accomplishments.

After taking office in 2004, Daniels ended collective-bargaining rights for public employees with an executive order, privatized a major state highway, lowered property taxes and turned a sizeable budget deficit into a surplus.

His legislative session in Indianapolis this year was unquestionably among the most productive of any Republican regime in the country. Thanks to GOP majorities in both chambers of the legislature, Daniels brought down corporate tax rates, passed merit pay for teachers and instituted the most expansive school voucher program in the country.

And unlike some of his potential Republican presidential rivals, he immediately condemned a federal cap-and-trade proposal and has spoken bluntly about the need to restructure Medicare and Social Security to keep the entitlement programs solvent.

Doug Gross, an influential Iowa Republican who chaired Mitt Romney's 2008 presidential effort in the Hawkeye State and is strongly considering backing Daniels if he seeks the White House, described the Indiana governor as "perhaps the most effective Republican leader we have seen in the last decade."

"Sometimes people that actually get things done are accused of compromising," Gross told CNN. "Some elements of the Republican Party would rather be to the right than effective. He gets accused of being a moderate just because he gets things done."

Daniels' conservative record has its blemishes.

As budget director from 2001 to 2003, he presided over two tax cuts and spending decisions that helped turn a $236 billion surplus into a $400 billion deficit (Daniels blames two unforeseen wars and an economic downturn for the budget hole).

None of those moves, though, unleashed the kind of conservative fury as his infamous call for a political "truce" on social issues until the country solves its debt problem.

Daniels, an opponent of abortion rights and same-sex marriage, has not backed away from the remark, further chafing those on the right who see no room for compromise on social concerns.

Dr. Richard Land, the president of the Southern Baptist Convention, said the "truce" comment reminded him of Phil Gramm's appearance on James Dobson's radio show during the then-senator's 1996 presidential bid. Gramm brushed off a question about social issues, telling Dobson, "I'm not running for preacher, I'm running for president."

"And that's the last time anybody heard of Phil Gramm," Land told CNN.

Daniels, though, showed no signs of capitulating on social issues this week when he signed controversial legislation cutting off funding for Planned Parenthood in Indiana, making him the only governor in the country to sign such a bill.

Outside the Indiana Republican Party's spring fundraising dinner on Thursday, one demonstrator from Planned Parenthood wielded a pink sign emblazoned with the question: "How about that 'truce,' Mitch?"

Land, who called Daniels "a strong Presbyterian" and praised his "very conservative record" as governor, said that signing the bill should help Daniels repair his standing among social conservatives.

But he said the truce comment will haunt him if he runs.

"Actions speak louder than words, and de-funding Planned Parenthood helps," Land said. "But he dug his own hole when he said we should call a truce. He has to walk that statement back. He has to."

Erickson, though, said he is concerned that Daniels is a deal-making technocrat whose goals square more with the Washington establishment than with the grassroots conservatives currently invigorating the GOP.

"They are tired of being talked down to, and Mitch Daniels seems like the guy who talks down to them," Erickson told CNN. "The big red flag for me was the truce stuff. It seems like picking a fight he didn't need to with social conservatives. There is a perception among conservatives that he may be with us, but he is going to stick his thumb in our eye the entire time."

Daniels supporters scoff at the suggestion that the governor, a former political strategist in the Reagan White House who won two statewide elections by riding a motorcycle and working the Indiana diner circuit, lacks the retail skills to connect with caucus and primary voters in Iowa and New Hampshire.

Questions about Daniels' conservatism, they say, ignore his record.

One former Daniels staffer, who did not want to be quoted handicapping his presidential chances, said the governor is simply motivated by problem-solving instead of fire-breathing rhetoric.

"I think the record is as conservative as anybody in public life who has actually done anything," the ex-staffer told CNN. "It's a matter of tone and what he chooses to focus on. He will occasionally say nice things about the president, for example. He is just not as divisive as some people would like. He's not angry about everything."