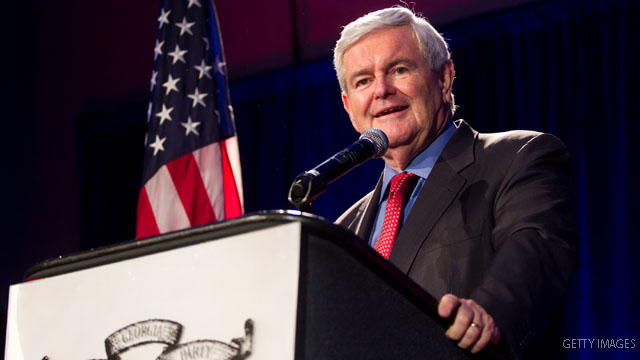 Macon, Georgia (CNN) - Newt Gingrich's first trip of his presidential campaign brought him home to a warm welcome in Georgia on Friday night.

The former Georgia congressman and House speaker addressed the Georgia State Republican Party's Victory Celebration in Macon, which gave him two standing ovations in a mostly full ballroom at the city's Centreplex venue.

Fresh off a Wednesday Twitter announcement that linked to a message declaring his candidacy, Gingrich battled bad allergies on Friday. Through several coughs and sniffles, he laid out his plans for the economy, national security and his desire to achieve what he calls "American exceptionalism."

Gingrich said Americans faced "the most consequential election since 1860," the year that Abraham Lincoln was elected president, citing the "enormous" differences between himself and President Barack Obama.

A second term of the Obama administration means a nation where "politicians define" and "bureaucrats implement the future."

In a Gingrich administration, he said, "Every American will have a chance to pursue happiness without being dictated to by bureaucrats, politicians and judges."

"If you believe in America as a unique place, then we want you to be on our side," he said.

Gingrich, who is often criticized for having big ideas and not enough focus to be a serious contender for the nomination, said the most important welfare program is employment. He listed four specific changes he would make to taxes that he thinks would stimulate the economy: eliminating capital gains tax, moving the corporate tax rate back to 12.5 percent and eliminating the estate tax.

In a state where farming is still vital to many local economies, his desire to allow businesses to write off equipment expenses was met with some of the loudest applause of the evening.

For the second time in a day, Gingrich called Obama "the most successful food stamps president."

"I would like to be the most successful paycheck president," Gingrich said, drawing applause from the crowd.

Gingrich offered no praise for the Obama administration and its role in the mission that killed al Qaeda leader Osama bin Laden, but stressed the need for the United States to reevaluate its relationship with Pakistan, where it is believed bin Laden had been living for at least six years.

He ended his remarks asking for help from Georgia Republicans to become leaders in his campaign.