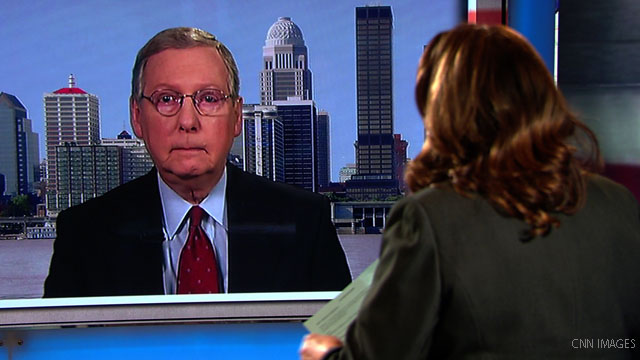 Washington (CNN) - While the budget negotiations led by Vice President Joe Biden continue with members of Congress, Senate Minority Leader Mitch McConnell maintained his position that a vote to increase the debt limit must be accompanied by changes in spending.

In order to vote to increase the limit of $14.3 trillion that the government expects to reach in coming months, McConnell called on Congress to institute a spending ceiling for the next two years and also address discretionary and mandatory spending and entitlement reforms, including Medicare and Social Security.

Click to watch video
"We need to do something significant short-term, medium-term and long-term," McConnell said Sunday on CNN's "State of the Union."

However, the Kentucky Republican said any agreement will not include tax increases.

"There aren't going to be any tax increases; that was settled by last November's election," McConnell told CNN Chief Political Correspondent Candy Crowley. "The president knows that."

His comments come as House Speaker John Boehner, R-Ohio, demanded last week that the size of cuts must exceed the size of any debt ceiling increases.

McConnell did not respond directly to Boehner's comments, making it unclear if he supports Boehner's equal dollar amount, or would prefer a different figure. However, he did say a deal that receives a positive prognosis from credit rating agency Standard & Poor's would win his support.

The rating agency recently downgraded the possible long-term prospects for the U.S. economy, and McConnell said Congress needs to reverse that outlook.

"Standard and Poor's would be a good indicator … if they are impressed with what we've done then that'll mean the markets think the Americans are going to get their act together," McConnell said. "That's my definition of significant."

Also appearing on CNN, Republican Rep. Paul Ryan of Wisconsin repeated Boehner's line on a possible debt ceiling deal, saying "for every dollar the president wants to raise the debt limit, we are saying cut at least a dollar's worth of spending."

"That is the necessary thing to do to stave off a debt crisis," Ryan added.