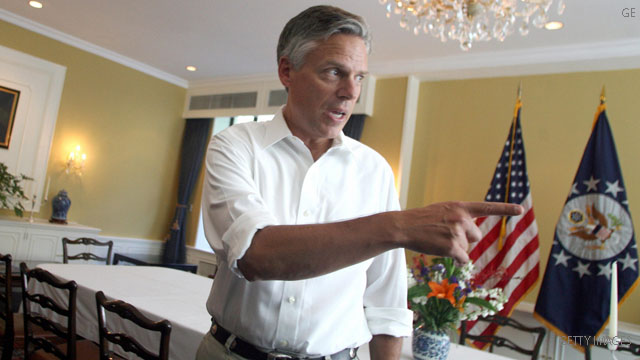 (CNN) - Two days after former Arkansas Gov. Mike Huckabee announced he will not run for the GOP presidential nomination in 2012, one of his advisers has thrown his support behind former Utah Gov. Jon Huntsman.

Mike Campbell, the son of former South Carolina Gov. Carroll Campbell and the South Carolina Chairman for Mike Huckabee's 2008 presidential campaign, said he was "extremely impressed" with Huntsman, who has yet to decide if he will run in 2012.

"Like all of us who worked so hard for my good friend Mike Huckabee's 2008 campaign, I was disappointed he decided not to run for president this year. However, in the quest to replace Barack Obama, we must quickly look to the future," Campbell said in a statement Monday. "As more South Carolinians get to know Governor Huntsman, I believe they will come to the same conclusion I have – that he is the right leader for our party and our country in this important election."

The statement comes as former Minnesota Gov. and potential 2012 candidate Tim Pawlenty is expanding his political operation in the Palmetto State, which holds the first-in-the-South presidential primary.

Campbell said he spoke with Huntsman, the former U.S. ambassador to China, earlier Monday and "strongly urged him to run for the Republican nomination for president and offered my enthusiastic support if he does."