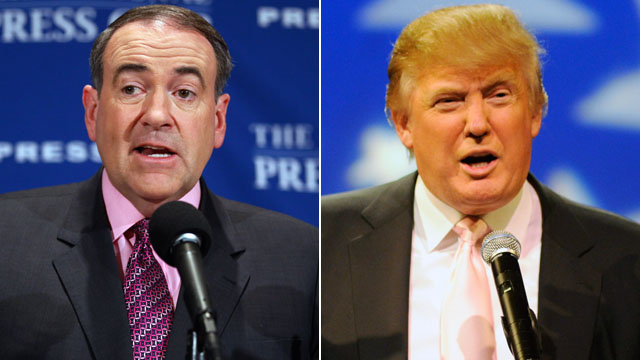 Instead, he'd continue hosting his weekly show and collecting a Fox News paycheck, playing bass guitar occasionally and making a few speeches around the country. After the live announcement on his TV show, a pre-taped message from Donald Trump aired, with the Donald saying, "a lot of people are very happy that he will not be running, especially other candidates."

Then, today it was Donald Trump's turn. While standing in front of TV critics and advertisers at the NBC Upfront, Trump revealed he would not be running for President either (but he will be back with a fifth season of "Celebrity Apprentice"!) and instead would remain in "the private sector." Both Huckabee and Trump had stirred up considerable interest and support in polls, but chose to avoid the political spotlight to retain a celebrity one.

One of the giants of the Republican party is Ronald Reagan, who left a career in Hollywood for one in public service. But that was a different time – in Huckabee and Trump we see a new path, one heavy in policy but devoid of the burden of political office.

It's very likely Mike Huckabee and Donald Trump want to be president.
But it's clear they don't want to go through what will be one of the most rigorous primary campaigns against a wide open field, and if successful there, a general election bid against the president who just answered "Can you find and kill Osama bin Laden?" with "Yes We Can." While there is no clear frontrunner, those who had at one time aspired to run are pulling back, including Mississippi Gov. Haley Barbour recently. But Huckabee and Trump saw the lead just one month ago – in an April CNN poll, they were tied for first among prospective GOP candidates.

It's easier to see why Trump dropped out. While gaining momentum based on tough talk aimed at China and questions about President Obama's birth certificate, Trump imploded after his tough talk got a little NSFW and the birth certificate surfaced. So he remains a celebrity, hosting a popular reality TV show and dropping f-bombs as much as he likes. It's important to note NBC wasn't hinging the future plans of the "Celebrity Apprentice" on Trump's return – they had already announced it would come back, with NBC's Bob Greenblatt somewhat ironically saying of Trump's presidential aspirations, "Nothing would make me happier to see somebody reach that dream."

Huckabee has the politician pedigree that Trump doesn't. He made a strong presidential run in 2008 – but that was before his Fox News show "Huckabee" and the money and financial benefits of fame. With Glenn Beck leaving Fox News in the next few weeks, the cable network has a hole at 5 p.m. ET that Huckabee could potentially fill. The promotion from a weekend show to a weekday slot would be a big move, and with it, the ability to influence the 2012 race in ways he may not have been able to if he was a runner-up in the GOP sweepstakes.

There's another potential candidate currently wrestling with the allure of political power versus the allure of the celebrity life. Sarah Palin was the 2008 GOP vice presidential nominee, but spoke to an entirely new audience last fall as the star of "Sarah Palin's Alaska" on TLC, a reality show about her family that provided a mix of patriotic messages and the standard reality TV fare. Palin has yet to decide – she'll have to soon, as she too is under Fox News contract – but many are speculating Palin will stick with TV (and leave her political forays to Twitter and Facebook).

While media members may find a Trump, Palin or even Huckabee run for the White House entertaining and ratings-boostingly convenient, the absence of these candidates help prove the power of the media and television even more.

Mike Huckabee doesn't want to expend the energy, money and time to potentially fall short of 1600 Pennsylvania Avenue. Instead, he'll comment on the race from the sidelines, in a culture where high profile sideline-commenting can be both lucrative and amazingly influential.

The days of Ronald Reagan, and giving up the celebrity spotlight for public service are diminishing. In fact, Huckabee took a recent mild shot at Reagan's policies.

Instead, we have the inverse-Reagan. It's so much easier (and more fun, and more financially beneficial) for Donald Trump to decide who gets hired and fired, instead of facing the American boardroom himself.