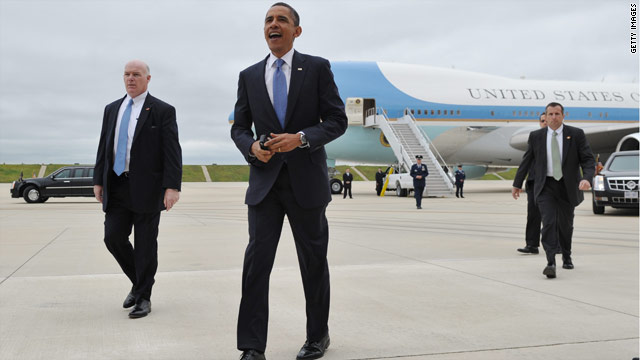 Washington (CNN) - After a travel-filled day, President Barack Obama ends his day with some pure politics.

The president will headline two fundraisers in the nation's capitol Monday night. The first is a dinner at the St. Regis hotel in downtown Washington, with the second a reception at the Capitol Hilton, which is located across the street from the St. Regis.

A Democratic source with knowledge of the events says approximately 650 people will attend the two events, and adds that Rep. Debbie Wasserman Schultz, the new chair of the Democratic National Committee, will introduce the president at the reception.

Also helping to introduce Obama is Ernie Green, a member of the "Little Rock Nine," a group of African-Americans who in 1957 were the first black students ever to attend classes at Little Rock Central High School in Little Rock, Arkansas.

Tickets for the two events range from $44 to the legal maximum limit of $35,800 that an individual can contribute for both the primary and the general election. The money raised will go to the Obama Victory Fund, with the proceeds being shared by both the president's re-election campaign and the Democratic National Committee.

Earlier Monday, the president headed to Memphis, Tennessee to meet with families impacted by the Mississippi River flooding, along with state and local officials, and first responders and volunteers.