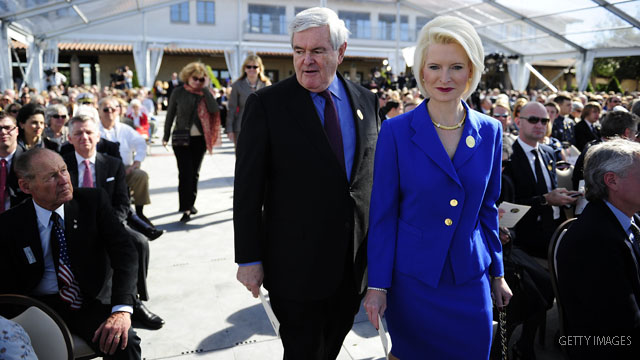 Washington (CNN) – Former House Speaker Newt Gingrich carried a revolving charge account between $250,001 and $500,000 in 2005 and 2006 for the high-end Tiffany & Co. jewelry store when his wife worked as a congressional staffer, according to public records.

The liability was reported in Callista Gingrich's financial disclosure forms filed in 2006 and 2007 covering activity from 2005 and 2006. Her job on the House Agriculture Committee ended on Jan. 1, 2007. As a high-level congressional employee, Callista Gingrich was required each year to file such a form detailing her personal finances from the preceding year.

Liabilities over $10,000 to any one creditor by the employee or his or her spouse during employment must be reported if the balance exceeded $10,000 at the end of the year. In this case, the Tiffany's liability was listed on the form as belonging to her husband.

Gingrich resigned as speaker in 1999 and was not required to file ethics paperwork as a private citizen.

Since he filed last week as a presidential candidate, he will have to submit his own disclosure form within 30 days.

In her 2007 form, Gingrich's wife reported the couple had assets totaling between $1.1 million and $2.7 million.

A Gingrich spokesman would not comment on the issue.

Though the reports have been publicly available for years, Politico was the first to discover and report the existence of the Tiffany's liability.