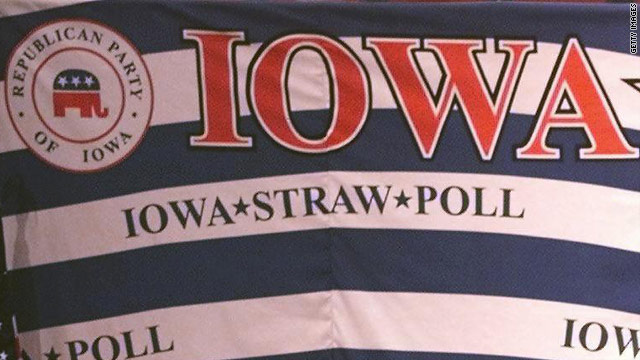 Dallas, Texas (CNN) - Republicans playing footsie with the presidential race and hoping to compete in the Iowa caucuses might want to start getting serious - and soon.

The Iowa Republican Party will hold their first meeting to outline rules and procedures for this year's Ames Straw Poll on Thursday, a state party official told CNN. Two representatives from each presidential campaign or potential campaign will be invited to the session.

The state GOP will hold two more planning meetings in June before approving the final straw poll ballot on July 23, so possible candidates like Indiana Gov. Mitch Daniels, former Alaska Gov. Sarah Palin and New Jersey Gov. Chris Christie must signal their interest in the Ames contest and begin organizing well before then.

The Ames Straw Poll, an all-day event scheduled for August 13 at the Iowa State University basketball arena, is seen as a crucial test of each campaign's organizational strength in Iowa and has the potential to make or break a candidacy.

The results are by no means scientific: More than 14,000 Republicans attended and cast ballots in 2007, but several top tier candidates, including Sen. John McCain and former New York City Mayor Rudy Giuliani skipped the straw poll. Romney, however, spent heavily to get his supporters to cast ballots.

Every presidential candidate will have the chance to address the 2011 straw poll audience, but no campaign surrogates will be given time to speak, the Iowa GOP official said.

This year's contest will also feature a new twist: Iowans who will be of voting age by November 2012 will be able to participate, meaning that high school students are sure to be targeted by each campaign.

Straw poll tickets will also cost $30 this year, $5 cheaper than in 2007. Out-of-state supporters can attend the straw poll but only Iowa voters are eligible to cast ballots.

The voting process will be supervised by Iowa Secretary of State Matt Schultz.