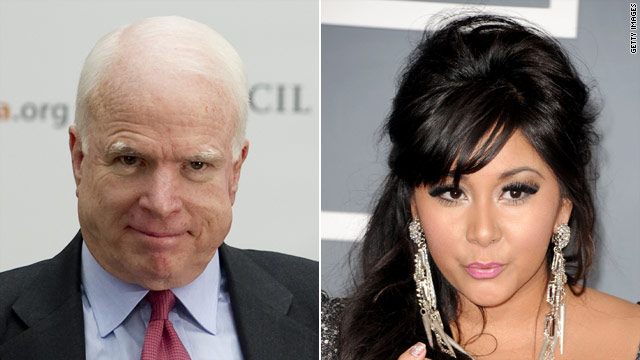 (CNN) - Sen. John McCain's nearly 2 million Twitter followers are accustomed to reading the Republican senator's 140-character missives on politics and current events, but it was a reply last June to the MTV star Snooki for which his feed can credit its many followers.

Politico reports that McCain recounted the story of his infamous tweet to the "Jersey Shore" cast member at the inaugural Al Jazeera U.S. Forum at the Newseum Monday night.

"As many of you know, the most famous, probably, and most watched by young people show on television is a show called 'Jersey Shore.' I don't know if you are familiar with that, but there's a young woman who is one of the stars called Snooki," McCain said, according to Politico.

"Snooki obviously avails herself of tanning facilities because she has a very deep tan at all times. And with the passage of the healthcare reform bill – I won't call it Obamacare, Nancy – part of it was a tax on tanning beds. So Snooki tweeted. She said, 'I am outraged that President Obama would raise taxes on tanning beds. Senator McCain would never do that because he's so pale.' So I tweeted back, 'You're right, Snooki. I would never raise taxes on tanning beds. It's The Situation.' That's one of the characters on 'Jersey Shore.' So what tweet got the award for tweet of the year? Not my profound statement about disarmament with Russia and the START Treaty, not my profound observations about the workings of Congress in the United States Senate, but the tweet I exchanged with Snooki," McCain said.

A McCain spokesman said at the time that McCain thought replying to the reality star via Twitter would be an "amusing way to respond to her comments," adding that Twitter is "a good medium for that kind of conversation."

But on Monday, the Arizona senator told the Newseum audience that the medium is not without dangers.

"So I hope you understand and appreciate that this means of communication has also sometimes got some dangerous aspects associated with it too," McCain said.

"Misinformation and things that are injurious to people, and we have to see that some self-discipline is exercised. I look at a lot of tweets that come back to me, and a large number of them call for my early demise, usually in a painful manner."