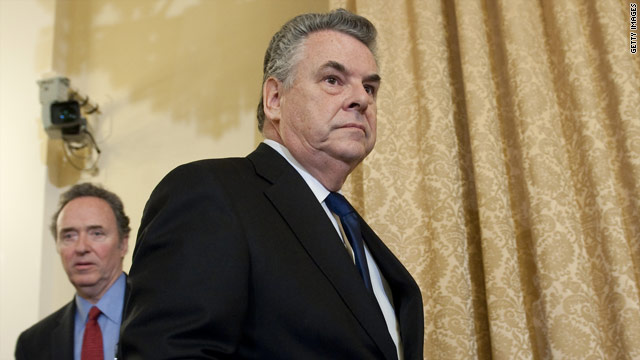 "I'm not going to say no," the New York congressman told CNN in a telephone interview on Wednesday.

King is the chairman of the House Homeland Security Committee. Next week, he'll hold hearings on how the death of Osama bin Laden impacts homeland security. In March, King held hearings on the radicalization of Muslim Americans.

The Long Island Republican explained the origins behind the notion of a possible presidential bid. King said that on Tuesday night – at a dinner for the Nassau County Republican Committee – chairman Joseph Mondello said he'd be supportive if he ran for president. King said that pledge of support followed similar sentiments expressed by others a few weeks ago.

And yet, King did not close the door on the idea of running.

"What happens, happens," he said. "I'm not going to say no," King said, referring to any efforts from the Nassau GOP group aimed at getting him to run.

Meanwhile, King took aim at a man who is running for president.

"It's a little too late," King said. "It was his own ego that made him say it in the first place. Newt cannot talk about things except in apocalyptic terms."

Accusing Gingrich of not being able "to share the spotlight with anyone," King added, "Newt was being the Republican Barack Obama, in attacking Paul Ryan. To me, it's unforgivable."

And King said he is not buying Gingrich's apology.

"All of us make mistakes. This was Newt Gingrich overreaching, exaggerating and attacking one of the most well-liked people in the Republican Party."