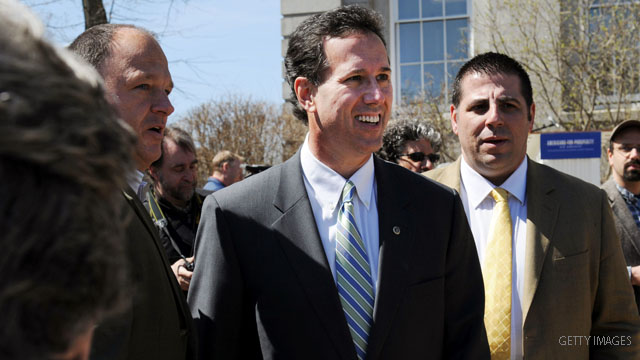 Click to watch video
"Everything I've read shows that we would not have gotten this information as to who this man was if it had not been gotten information from people who were subject to enhanced interrogation," Santorum said. "So this idea that we didn't ask that question while Khalid Sheikh Mohammed was being waterboarded, he doesn't understand how enhanced interrogation works. I mean, you break somebody, and after they're broken, they become cooperative. And that's when we got this information."

He later said he meant no disrespect to the former GOP presidential nominee.

"I disagree with Senator McCain's view that the enhanced interrogation techniques used on a select few high-value terrorist detainees were unsuccessful nor do I believe they amounted to torture," Santorum said in a statement Wednesday. "For anyone to infer my disagreement with Senator McCain's policy position lessens my respect for his service to our country and all he had to endure is outrageous and unfortunate."

In the wake of the U.S. assault on the bin Laden compound in Pakistan, the Arizona senator has said the terrorist leader's death should not justify techniques like waterboarding, that he believes do not help in combating terrorism.

And when questioned about Santorum's slight backtrack, Buchanan said "Senator McCain appreciates his comments and considers the matter closed."

Santorum and McCain clashed in the Senate, most notably over McCain's bill to reform campaign finance laws. During the 2008 presidential election Santorum, who endorsed then presidential candidate Mitt Romney, questioned whether McCain had the disposition to be president in an automated phone call used by the Romney campaign on Super Tuesday.

"As a conservative, I don't agree with McCain on many issues and I don't think he has the temperament and leadership ability to move the country in the right direction," Santorum said in the call.