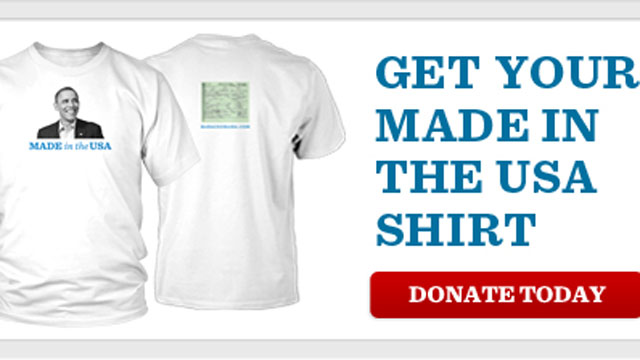 The campaign sent an email to supporters Wednesday selling t-shirts and mugs with a picture of President Obama above the words "Made in the USA" and a copy of his birth certificate.

"There's really no way to make this stuff completely go away. The only thing we can do is laugh at it – and make sure as many people as possible are in on the joke," the email from Deputy Campaign Manager Julianna Smoot said. "Last year, the President said, 'I can't spend all of my time with my birth certificate plastered on my forehead.' This is about as close as we can get."

Obama, who released his certificate of live birth during the 2008 presidential campaign, produced the long-form version of the certificate last month after the issue became a topic of national conversation, partially prompted by real estate mogul Donald Trump, who raised the issue while exploring a run for president.

According to the email, the campaign reaction was in response to a book, "Where's the Birth Certificate" set to release later this week.