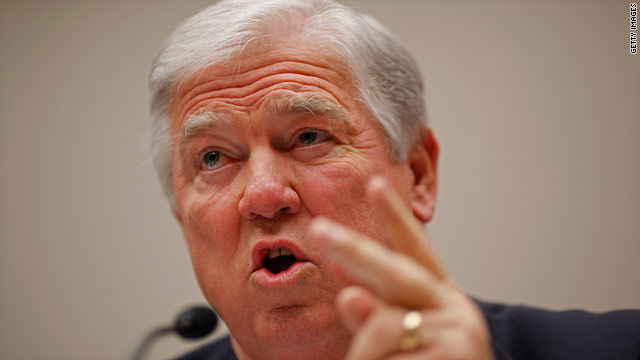 Washington (CNN) - Now that he's officially out of the race for the GOP presidential nomination in 2012, Mississippi Gov. Haley Barbour is candidly sharing his thoughts on the field of potential candidates.

During an interview with CNN Chief National Correspondent John King Thursday, Barbour said that announced candidate Newt Gingrich was "thoughtful and smart" but appeared to be a "jerk" in the press.

When questioned about his thoughts on Gingrich, whom he considers a friend, Barbour admitted that he, too, has had regrettable moments in the public eye.

"I've said stuff in my career that I wish I could take back," he said on CNN's "John King, USA."

But according to Barbour, when it comes to perception, it isn't all Gingrich's fault.

"When you're running for president you can't take anything back, and that's just the way it is ... there are people in politics that the press treats more favorably than others ... Newt's not one of those," he said.

"What the press chooses to cover and how they cover it is for some candidates better - and they get put under the filter. And (others) get the spotlight put on them hard as they can. Newt has always suffered from that."

The spotlight has been particularly bright on Gingrich since his appearance Sunday on NBC's "Meet the Press," in which he called the Medicare provision in the House GOP budget plan proposed by Wisconsin Rep. Paul Ryan a "radical change."

Gingrich has spent the last several days walking back the comment, and on Tuesday spoke on the phone with Ryan in an effort to mend fences. A spokesman for Ryan said the congressman "accepted former Speaker Gingrich's apology."

Gingrich told CNN earlier this week: "Let me just say I think Paul Ryan did a great job overall but I think the Medicare part needs to go through a public process, discussion, and improvement and modification and I think it can. I think he has the beginning of what could be an extraordinary plan."

The bottom line on Gingrich's rocky ride with the media is no mystery, as far as Barbour is concerned.

The "liberal media elite" are certainly "just beating Newt over the head," he said.

Barbour recalled the impression the former speaker of the House made on colleagues when he was chairman of the Republican National Committee.

"If you heard make a 45-minute speech, even moderately liberal people would say, 'Man he is thoughtful and smart!' But the sound bites made people think, 'What a jerk!'"

Barbour also finds solid GOP nominees in two potential candidates who have not yet announced.

Of Indiana Gov. Mitch Daniels, who has said that he "won't take much longer" on deciding whether he'll seek the GOP nomination, Barbour repeated his recent words of praise: "Mitch is a smart guy, I think he would make a good president," he affirmed.

"I told him when I was thinking about running that even if I ran, he ought to run. That it's good for the field, to have many good candidates."

Former Utah Gov. Jon Huntsman, who recently resigned from his post as U.S. ambassador to China and has been criticized by some who believe he is too moderate, also has Barbour's approval.

Declaring there's "no question" Huntsman is a conservative, Barbour conceded that they don't agree on some issues, but, "he was in the Reagan administration," and "elected and re-elected" governor of a "very conservative state."

"So if you ask me is Jon Huntsman qualified to be the Republican nominee for president of the United States, the answer is of course he is," Barbour said.