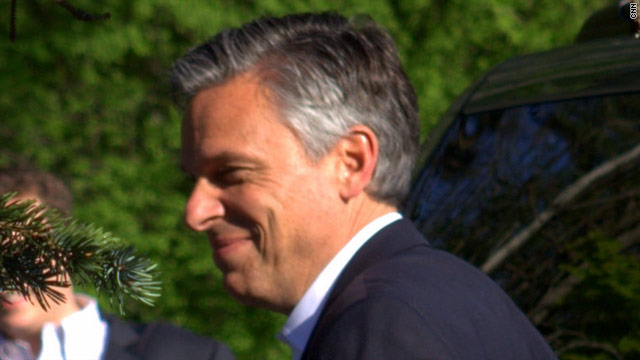 In front of a small GOP crowd in the town of Hanover, the former Republican governor of Utah and, more recently, U.S. ambassador to China under President Barack Obama tried to downplay expectations.

"We are the quintessential margin-of-error potential candidate," Huntsman said.

But the presidential stage-crafting was hard to miss. Huntsman arrived at Thursday's scheduled "meet and greet" at Jesse's Restaurant with his wife, Mary Kaye, and two of the couple's seven children at their side.

Inside the eatery once frequented by the likes of candidates including Barack Obama and John McCain, Huntsman said he will make a decision on his 2012 plans in the coming weeks.

"We are in the early stages of due diligence," he said.

Seen as a rising star in the GOP, Huntsman has yet to declare his candidacy. But he plans to make roughly a dozen stops over five days in this crucial primary state. His pre-campaign swing is generating national media attention as some Republicans have expressed reservations about the current slate of potential candidates.

But in a brief interview with CNN, Huntsman acknowledged some Republicans will have questions. First among them is that Huntsman stepped down as Utah's governor to serve as President Obama's ambassador to China. "Every candidate has a record," he said.

Huntsman then took the issue head-on during his opening remarks. "I didn't serve President Obama I served my president," said Huntsman. "I'm the kind of person, when I'm asked, I serve," he added.

The ex-diplomat spent much of the evening laying out his foreign policy views, even offering some brief criticism of Obama's speech on the Middle East Thursday. In that speech, Obama called for Israel and Palestine to return to borders established in 1967.

The president's speech prompted criticism from some Republicans, with likely GOP contender Mitt Romney declaring that Obama had thrown Israel "under the bus."

Huntsman offered no such red meat. "When you've got sensitive negotiations, the first question I have to ask is that if you respect Israel, we probably ought to ask what they think is best," he said.

Huntsman's economic message drew on his experience in China as he reflected on how he viewed the U.S. from "10,000 miles away."

Describing China as "proud" and "growing" and the United States as "depressed" and "dispirited," Huntsman said the upcoming presidential race will determine whether the nation can get its "act together."

"It's going to be about whether this country is ready for the 21st century," Huntsman said.

Huntsman's understated, cerebral approach will be tested by conservatives who don't like the former governor's past support for "cap and trade" legislation and civil unions for same-sex couples.

The low-volume approach didn't work with everybody in the crowd.

"Speak up!" shouted one woman.