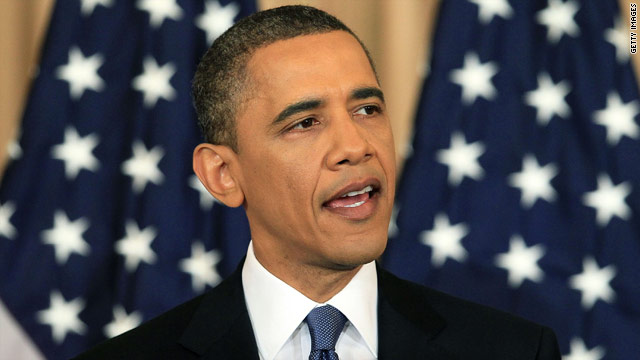 Washington (CNN) - In the wake of the Arab Spring protests across the Middle East and North Africa, President Barack Obama will pledge U.S. economic assistance to Egypt and Tunisia on Thursday in a speech highlighting his administration's revised policies toward the changing region.

1:23 p.m. ET - @clancycnn: It was an important speech. Pivotal? I'm afraid not. Arab/Muslim world will wait and watch - for what actions the U.S. takes.

1:15 p.m. ET - @clancycnn: Several have pointed out Obama said vote for a Palestinian state was "symbolic" and wouldn't create a state. But its a legal move.

1:12 p.m. ET - Obama has arrived back at the White House following his speech at the State Department.

1:10 p.m. ET - @bencnn: As Obama's #mespeech came to an end some trigger-happy blokes opened up with machine guns outside hotel in Benghazi.

1:09 p.m. ET - @clancycnn: The speech was broad but pretty comprehensive. Obama's challenge will be walking the walk - we know he's got the talking part down pat.

1:08 p.m. ET - @KMFlower: Palestinians are not going to have heard much at all in that speech that will change their current political trajectory #cnntv #mespeech

1:05 p.m. ET - @clancycnn: There was no mention of Saudi Arabia, perhaps telling of the tensions with Washington right now. But he was clear on Bahrain.

1:04 p.m. ET - @clancycnn: Obama admitted the obvious: The U-S didn't lead this change, it was spearheaded by the people of Tunisia Egypt Libya Syria Bahrain Yemn

1:02 p.m. ET - @clancycnn: The tone of the speech may be welcome, but there was no specific "follow through" of action - what people could really expect of Washington

1:01 p.m. ET - @clancycnn: This speech analyzed the Arab Spring and tried to refocus his own view of the Palestinian-Israeli conflict.

1:00 p.m. ET - @clancycnn: #Obama finishes speech. It was long on enthusiasm and heartfelt support for the change sweeping the Arab and Muslim world.

12:56 p.m. ET - @clancycnn: #Obama Majority of Israelis and Palestinians would rather look to the future than be trapped in the past...

12:55 p.m. ET - Obama: "Recognizing that negotiations need to begin with the issues of territory and security does not mean that it will be easy to come back to the table. In particular, the recent announcement of an agreement between Fatah and Hamas raises profound and legitimate questions for Israel – how can one negotiate with a party that has shown itself unwilling to recognize your right to exist. In the weeks and months to come, Palestinian leaders will have to provide a credible answer to that question. Meanwhile, the United States, our Quartet partners, and the Arab states will need to continue every effort to get beyond the current impasse."

12:57 p.m. ET - @eliselabottcnn: Obama makes bold statements on Israeli-Palestinian conflict but doesn't say he is sending Clinton to region to advance them #MESpeech

12:52 p.m. ET - @edhenrycnn: But Miller notes President Obama stays away from Jerusalem & refugees - was a bone to Israel & means Palestinians don't get all they want

12:51 p.m. ET - @edhenrycnn: Significance of Obama on Israel, according to Aaron David Miller, "it goes farther than any other president has gone in a formal address"

12:51 p.m. ET - Obama: "Ultimately, it is up to Israelis and Palestinians to take action. No peace can be imposed upon them, nor can endless delay make the problem go away. But what America and the international community can do is state frankly what everyone knows: a lasting peace will involve two states for two peoples. Israel as a Jewish state and the homeland for the Jewish people, and the state of Palestine as the homeland for the Palestinian people; each state enjoying self-determination, mutual recognition, and peace."

12:47 p.m. ET - @clancycnn: #Obama Decades of Arab-Israeli conflict have cast a shadow over the region. Palestinians have never lived in a nation of their own.

12:43 p.m. ET - Obama: "The goal must be a model in which protectionism gives way to openness; the reigns of commerce pass from the few to the many, and the economy generates jobs for the young."

12:40 p.m. ET - Obama: "America will work to see that this spirit prevails – that all faiths are respected, and that bridges are built among them ... What is true for religious minorities is also true when it comes to the rights of women."

"For the region will never reach its potential when more than half its population is prevented from achieving their potential," Obama said.

12:39 p.m. ET - Obama: "What we will oppose is an attempt by any group to restrict the rights of others, and to hold power through coercion – not consent. Because democracy depends not only on elections, but also strong and accountable institutions, and respect for the rights of minorities."

12:36 p.m. ET - Obama: "Our message is simple: if you take the risks that reform entails, you will have the full support of the United States."

12:33 p.m. ET - @clancycnn: #Obama First protests were in streets of Tehran. We will continue to insist the Iranian people deserve their universal human rights.

12:31 p.m. ET - @edhenrycnn: Obama on Libya: "Had we not acted ... thousands would have been killed." Gadhafi "doesn't have control over his country" now #MESpeech

12:30 p.m. ET - @edhenrycnn: Now President turns to Libya, taking aim at Gadhafi for vowing he would hunt down his own people "like rats" #MESpeech #CNNTV

12:29 p.m. ET - @eliselabottcnn: policy of US to promote reform and transitions to democracy across the regio- begins in Egypt and Tunisian where the stakes are high

12:28 p.m. ET - @eliselabottcnn: Obama: .chance to show American values the dignity of the street vendor in #Tunisia more than the raw power of the dictator

12:24 p.m. ET - Obama says "calls for change may give way to fierce contest for power," leaving the U.S. to question what role it will play as the "story unfolds." Says America has a stake in "in the self determination of individuals."


Click to watch video
12:23 p.m. ET - @bencnn: President Obama forgot to mention #Bahrain in that list of countries where people are crying out for freedom. #MEspeech

12:18 p.m. ET - Obama compares young man who set himself ablaze in Tunisia to the Boston Tea Party and Rosa Parks.

12:17 p.m. ET - @clancycnn: #Obama: OBL Concentrated on destroying, not on building. His movement was already seen as a "dead end" in Middle East.

12:15 p.m. ET - Obama: "We know that our own future is bound to this region by the forces of economics and security, by history and by faith."

12:14 p.m. ET - Obama takes the stage, jokes that Secretary Clinton has traveled so much she is approaching one million frequent flyer miles.

12:13 p.m ET - @clancycnn: Clinton: Tunisians and others across the Middle East have given the world inspiration to claim their universal rights....

12:10 p.m. ET - Secretary Clinton, introducing the president stresses the importance of American leadership around the world.

12:08 p.m. ET - @clancycnn: One thing to keep in mind, Arab rulers like King Abdullah of Saudi Arabia are MOST UNHAPPY with U.S. treatment of Mubarak.

12:07 p.m. ET - @clancycnn: Still waiting for Obama. I wonder, if he can't push Israel-Pal peace process, will he vote 'No' at the U-N to a Palestinian State?

12:03 p.m. ET - @arwaCNN: ahead of #obama speech #syria activist says only hope is in own people #CNNTV #MEspeech

12:02 p.m. ET - @eliselabottcnn: State Dept audience for POTUS speech filled w/ Arab ambassadors whose countries suffered, are in the throws of, or about to have revolutions

11:56 a.m. ET - @bencnn: I watched US Mideast policy go into a tailspin during the #Egypt revolution. It appears to still be in tailspin cycle. #mespeech

11:53 a.m. ET - @KMFlower: Differing accounts from on whether Obama will make news on Israel – Palestinian conflict – where are those excerpts?

11:48 a.m. ET - @bencnn: Whatever pundits say, Obama's #mespeech underscores US confusion about what to do in a region it's been deeply involved in for decades.

11:30 a.m. ET - @edhenrycnn: Aides are tight-lipped but soundingto me the President will NOT callfor pre-1967 borders for Israel.

11:29 a.m. ET - Secretary of State Hillary Clinton will introduce the president before his address at the State Department.

11:12 a.m. ET - @KMFlower: Israel PM Netanyahu will be leaving for DC a couple of hours after Obama #MEspeech #cnntv

11:04 a.m. ET - @bencnn: There were great expectations in Cairo after Obama's 2009 speech. So much since then has changed expect, perhaps, the cliches. #mespeechm.