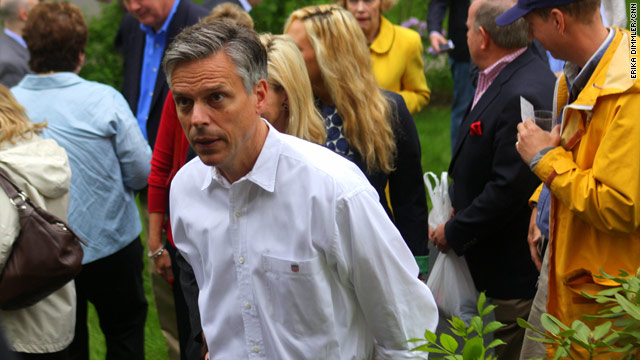 Meeting face to face with voters at events in private homes in New Hampshire, Huntsman took few if any political swipes at his former boss, President Obama.

"We didn't put out a mandate on companies or individuals," Huntsman told one crowd in response to a question about how he handled health care reform for the uninsured in his home state.

During a brief exchange with reporters, Huntsman said he would work to repeal the national health care law.

It was restrained beginning for a potential candidate whose party has at times savaged the President on issues from health care reform to birth certificates.

Instead, Huntsman was much more diplomatic than dogmatic in drawing the contrasts between himself and the President.

The former ambassador said he would have opted against military action in Libya because the U.S. simply can't afford it, regardless of the humanitarian costs.

"We could be responding to corners of the world constantly if that's the motivating factor," Huntsman said.

In an era when both parties subject their candidates to strict litmus tests, it's unclear how conservatives in the GOP will respond to Huntsman's more cerebral and less confrontational style.

Calling himself a pragmatist, the former Governor declined to place himself on the Republican spectrum.

"We've got to get past a tag mentality. I think that's artificial. It's superficial. And I think it's misleading," Huntsman said.

Team Huntsman believes the potential contender's low-key, policy-driven style could be a winning approach for 2012.

"The way to beat Obama is to go bigger than Obama. Not smaller," said John Weaver, Huntsman's top political advisor and a seasoned campaign veteran who was once a leading strategist for a different maverick, John McCain.

Huntsman's diplomatic approach will be tested first by conservatives in his own party who will question the former Ambassador's more moderate stances on issues like "Cap and Trade."

"Every one who has been elected to political office has a history. Some will like it. Some won't," Huntsman said.

At some of those meet and greet events in New Hampshire, several Republican voters indicated they like Huntsman's fresh approach. But it's too early for first impressions to translate into votes.

Jan Hillner, a lifelong Republican from the tiny town of Hancock, said it's too early to tell whether Huntsman can defeat the President.

"How can you really say that when you don't know the man?" asked Hillner.