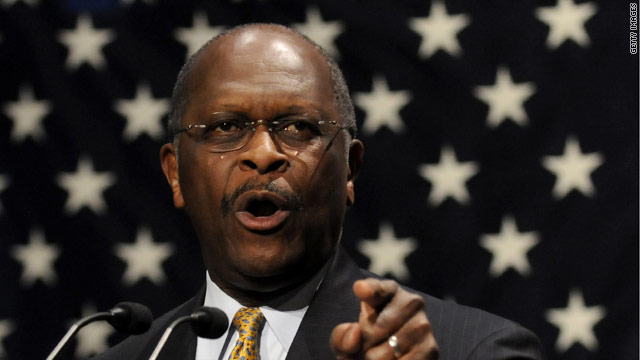 Atlanta (CNN) - Using an urban phrase used to convey a sense of excitement, radio host and businessman Herman Cain emerged to throngs of supporters on Saturday and formally announced his presidential bid.

"Awww shucky ducky," the conservative Republican joked with the crowd in Atlanta's Centennial Olympic Park as he stepped out to applause and adoring chants.

Moments later, he turned to the more serious announcement.

"Right here, this day, this hour and this moment, I have looked inside of me. I came here to declare my candidacy for the Republican nomination for president of the United States of America," Cain said.

"And just to be clear, in case you accidentally listen to a skeptic, let me say it again, I'm running for president of the United States. And I'm not running for second," he added.

He went on to blast President Barack Obama over the unemployment rate, decry the nation's $14 trillion-plus debt and decry rising energy prices.

Cain is now the fourth Republican - and the first African-American - to officially enter the GOP race for president.

Others - including former Massachusetts Gov. Mitt Romney, former U.S. ambassador to China Jon Huntsman, Indiana Gov. Mitch Daniels and former Pennsylvania Sen. Rick Santorum - are either expected to officially enter the race or are seriously mulling it over.

In a crowded field of contenders, Cain hopes his solid business credentials and Tea Party ties will help him stand out.

He's the former CEO of Godfather's Pizza, and has previously been an executive with various companies including Coca-Cola, Pillsbury and Burger King. And his plainspoken defense of less spending and lower taxes has helped him become a favorite of Tea Party activists.

And yet, many political observers routinely dismiss Cain's candidacy. Some cite his scant political experience - he's never won elective office - and his low name recognition against the better-known contenders. Additionally, Cain has acknowledged some holes in his foreign policy knowledge, though he's said he'd employ and listen to the best experts to make decisions if he were president.

Meanwhile, Cain hews to a position on entitlement spending that's popular with conservatives but could be problematic with others who frown on major changes to Social Security, Medicare and Medicaid.

That said, Cain surely hopes his candidacy will get a boost both by his official entrance and by serving up red meat to hungry, anti-Obama supporters.