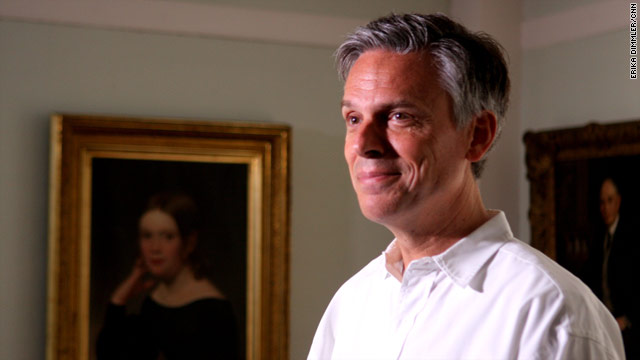 Huntsman calls for civility and optimism in New Hampshire speech

(CNN) – Halfway through a five-day tour of the early presidential battleground state of New Hampshire, former U.S. Ambassador to China Jon Huntsman delivered his second commencement address in as many weeks as he continues to test the waters for what many see as an increasingly likely 2012 bid.

Huntsman used his address to the Southern New Hampshire University graduating class to reiterate a message he has been honing since returning from Beijing just three weeks ago: the U.S. is not falling behind China in the global economy.

“You hear how the Chinese economy is going to swamp us. Don’t believe it,” Huntsman said. “China has its own problems. And we have our own strengths. I mean, there is a reason that Google was started in America and not Russia or Germany or China.”

As he addressed the crowd in the “live free, or die” state, Huntsman exuded optimism, telling the graduates that America’s “values are stronger than her challenges,” and reminding them that though we may forget it, our freedom still inspires those who are repressed around the world.

“Here at home, listening to cable news 24/7, it’s easy to forget that our nation still pulses with a vital, life-enriching energy that comes from the very freedom we breathe. The dissidents around the world see this. Sometimes we are too close to appreciate its impact.”

The former Utah governor also called on Americans to “remain civil to each other.”

“This country truly does have the democratic and economic resiliency to change without breaking. And civility acts as a lubricant to make the system work,” he said.

But as he mulls a bid for the White House, Huntsman has had to contend with critics who say that he is too civil. The Republican, who stepped down as governor of Utah to serve as President Obama’s ambassador to China, has spent the last few weeks explaining why he decided to work for a Democratic president. He has tried to frame his service as an act of patriotism, often repeating, “I didn't serve President Obama, I served my president.”

He has thus far, however, been unable to shed the association to his former boss, as political observers note their amicable relationship and their apparent similarities, such as their temperate demeanors.

In fact, just four years ago, then-candidate Barack Obama delivered his own message of hope from the very same stage.