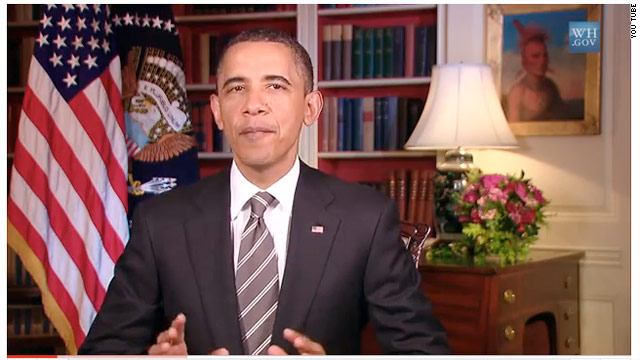 Obama calls for reform of ‘No Child Left Behind’

Washington (CNN) – President Barack Obama used his weekly address on Saturday to call on Congress to reform "No Child Left Behind" – the controversial educational policy implemented by President George W. Bush in 2002.

“We need to promote reform that gets results while encouraging communities to figure out what’s best for their kids. That why it’s so important that Congress replace No Child Left Behind this year – so schools have that flexibility. Reform just can’t wait,” Obama said while touting his own administration’s educational policy, "Race to the Top."

“The idea is simple: if states show that they’re serious about reform, we’ll show them the money. And it’s already making a difference throughout the country,” Obama said of the two-year-old program.

The president cited Booker T. Washington High School in Memphis, Tennessee – the winner of his “Race to the Top Commencement Challenge” – as an example of successful reform.

The historically low-performing high school earned a visit from the president by demonstrating a dramatic improvement in its performance and graduation rate. Obama delivered the commencement address at the Memphis school earlier this week.

“This is a school in the middle of a tough neighborhood in South Memphis. There’s a lot of crime. There’s a lot of poverty,” Obama said. “And just a few years ago, only about half of the students at the school graduated. Just a handful went off to college each year. But folks came together to change all that.”

“Today, four out of five students at the school earn a diploma. 70 percent continue their education, many the first in their families to go to college. So Booker T. Washington High School is no longer a story about what’s gone wrong in education. It’s a story about how we can set it right,” he said.

Obama said the goal now is to promote similar reform across the country.

“We need to reward the reforms that are driven not by Washington, but by principals and teachers and parents. That’s how we’ll make progress in education – not from the top down, but from the bottom up,” Obama said.

In response to Obama’s address, House Committee on Education and the Workforce Chairman John Kline, R-Minnesota, called on Obama to work with Congress to enact real reform.

“My House Education and the Workforce Committee colleagues and I are focused on advancing targeted proposals that reduce federal regulatory burdens in the classroom, encourage flexibility for states and local school districts, and put the needs of students first,” Kline said.

“The nation's education system is in critical need of improvement, but thoughtful, responsible reform will take more than rhetoric. I hope the president will work closely with Congress as we move forward a series of key education bills."