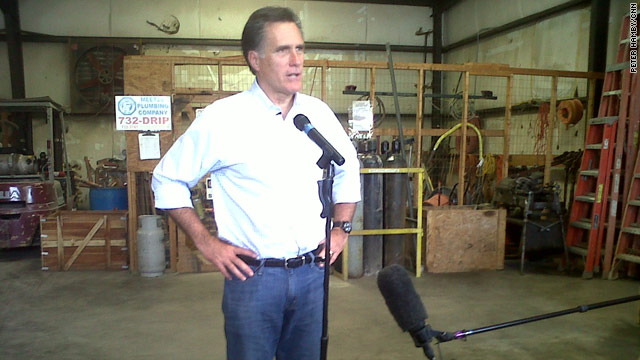 Irmo, South Carolina (CNN) - Mitt Romney spoke to a button-downed group of small business owners Saturday in the early primary state of South Carolina, but with frequent nods to the Constitution and states' rights, he sounded like he might have been at ease addressing a Tea Party rally instead.

Romney, who donned jeans and rolled-up shirtsleeves for his first visit to South Carolina as a potential Republican presidential candidate, questioned President Barack Obama’s understanding of the role of government and basic economic matters.

“I respect the rights of states to come up with their owns answers and their own solutions to compete with one another,” he added.

The former governor’s argument conveniently dovetails with his aggressive defense of the health care plan he implemented in Massachusetts, which has drawn scorn from some conservatives because of its strong resemblance to President Obama’s health care law.

Later, taking questions from the roughly 30-member audience, Romney went out of his way to address the elephant in the room.

“Someone’s got to ask me about health care right?” Romney said with a chuckle, prompting several voters to raise their hands.

He responded that, if elected, he would immediately repeal “Obamacare” and give states block grants to develop their own health care programs.

Romney’s first foray into South Carolina was a simple question-and-answer session held in the warehouse of Meetze Plumbing, a small business in the Columbia suburb of Irmo. Romney and his staff stopped by an area barbecue joint on the way into town and brought trays of pulled pork, hushpuppies and jugs of iced tea for the audience.

The low-key affair signaled that Romney intends to run a different kind of campaign in the state than he did in 2008, when his well-funded South Carolina footprint included a team of veteran political consultants, a small army of field staffers and splashy road-signs planted at seemingly every street corner.

Romney went on to finish fourth in the 2008 South Carolina primary, and this time around his exploratory committee has only one staffer on the ground.

Still, Romney was keen to make note of local economic issues facing the state, and said he had spoken with Gov. Nikki Haley about job creation in the state.

A Haley spokesman later said the two chatted on the phone on Friday. Haley backed Romney’s 2008 bid when she was a state legislator but has not picked a horse in the 2012 race. Though she has promised to endorse a candidate before next February’s primary.

Romney cited a complaint filed by the National Labor Relations Board that could halt construction of a new Boeing facility in South Carolina. The North Charleston plant is expected to create thousands of jobs.

“How in the world can the president justify the federal government taking power from South Carolina and not allowing South Carolina to compete on a fair and level playing field?” he asked. “It’s simply unexcusable.”

After his appearance, Romney took questions from reporters and was pressed on whether he supports the Medicare plan in the budget drafted and approved by the Republican-controlled House. A Democratic outside fundraising group, Priorities USA Action, is running a television ad in South Carolina pressing Romney to take a position on the plan.

The controversial proposal, developed by House Budget Chairman Paul Ryan, would replace the current government-run Medicare program with a voucher system that would allow recipients to buy health care on the private market.

Conservatives have embraced the plan as a responsible way to lower the costs of entitlements while Democrats have accused Republicans of plotting to destroy Medicare.

Asked twice about whether he supports Ryan’s plan, Romney responded that he will roll out his own ideas for Medicare at a later date but blasted the president for not coming up with his own solution.

While he applauded Ryan for thinking seriously about fixing the entitlement debt burden, Romney said Ryan's plan “is not the same as my plan.”

“The Ryan plan and my plan are on the same page," he said. "We have the same objectives. My plan is different than his. It’s not identical.”

Romney said it would be “premature” to venture into specifics about his own proposals because he is not yet an official candidate, and referred reporters to some Medicare parameters he outlined in his 2010 book “No Apology: The Case For American Greatness.”