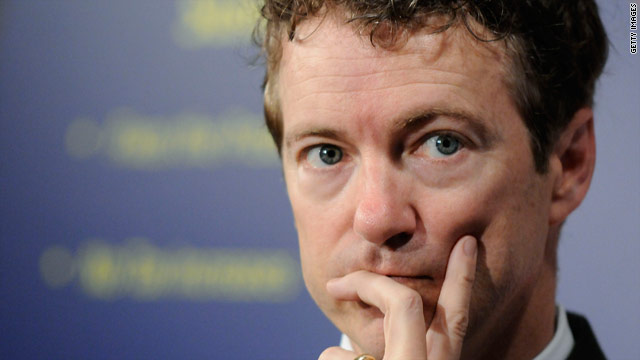 “We go week after week in the Senate and do nothing. I feel like sometimes I should return my check because I go up, they do no votes and no debate,” the freshman senator griped during an interview on “Anderson Cooper 360.”

“We go up week to week, and there's no debate in Congress, no debate in the Senate. We sit idly by,” he continued.

Paul’s frustration stems from his attempt to introduce a resolution challenging the constitutionality of the U.S. military operation in Libya. The motion was tabled 90-10.

“They don't want to have any debate. I'm asking right now to vote on Libya. I have a resolution saying we're in violation of the War Powers Act. It's hard for me to get the floor unless I somehow sneak on the floor when no one is looking to try to get a vote,” Paul said.

The 1973 War Powers Act says that if the president does not get congressional authorization 60 days after military action, the mission must stop within 30 days. Obama formally notified Congress about the mission in Libya with a letter on March 21, which made Friday the 60-day deadline.

But Paul told CNN’s Anderson Cooper that Obama is already in violation of the law.

“The War Powers Act says there's only three reasons a president can go to war: Declaration of war by Congress, authorization or force by Congress or imminent danger,” Paul said.

“He should have come to Congress, spoken to a joint session of Congress and said, I need the power to go to war, this is why, and explain to the people.”

Paul also said he was upset that Obama had time to get permission from the United Nations and the Arab League, but not Congress.