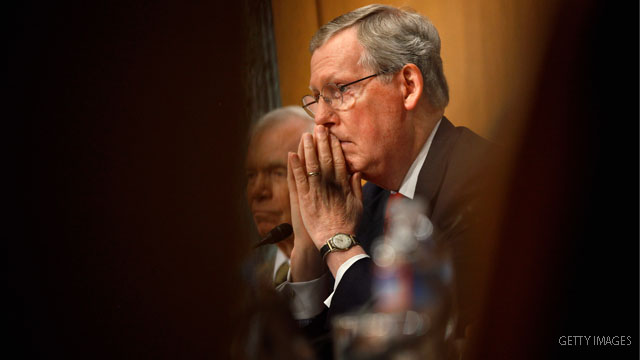 In an interview on "Fox News Sunday," McConnell reiterated previous Republican opposition to higher taxes but changed one word by specifying that he and the GOP are against higher tax "rates."

"You cannot get anywhere if you start raising tax rates," the Kentucky senator said in discussing negotiations with President Barack Obama and Democrats on a deficit reduction plan.

Previously, McConnell and other conservative Republicans have railed against higher taxes in any form, and McConnell's use of the term "tax rates" indicated a shift in the mainstream GOP position.

Chris Wallace of Fox caught the distinction and asked McConnell if his language indicated he was open to collecting more tax revenue by ending some subsidies and loopholes. McConnell deflected the question, saying he wouldn't negotiate a deal on the program.

Another conservative Republican, Sen. Tom Coburn of Oklahoma, has previously stated a willingness to accept more tax revenue in an overall reform of the tax code that would lower tax rates while eliminating many loopholes and subsidies.

Hard-line conservatives who seek smaller government immediately criticized Coburn for what they called an enabling attitude that would hinder efforts to slash spending.

On Sunday, McConnell repeated the conservative mantra that the government spends too much rather than taxing too little. He also repeated his insistence for significant spending cuts and deficit reduction measures before Republicans will vote to increase the federal debt ceiling in coming months.

The White House and Democrats want to separate the debt ceiling issue from overall deficit reduction, saying it is too risky to link the nation's creditworthiness with political maneuvering.