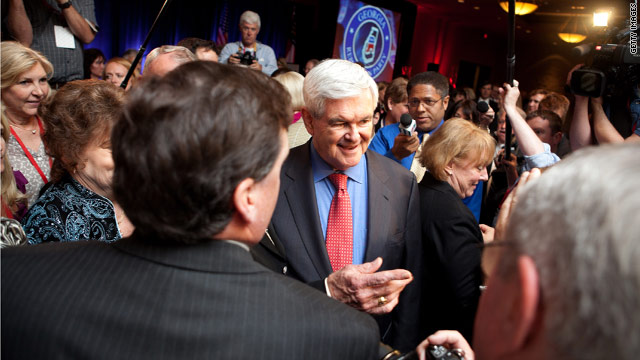 Gingrich attempts to turn the tables

Washington (CNN) - Former House Speaker Newt Gingrich attempted to turn the tables on the negative press he's received inside the beltway at a breakfast with journalists in Washington Monday.

"I can't thank the Washington press corps enough for the last week," he said, recalling coverage of GOP colleagues who lashed out at the 2012 presidential candidate for appearing to reject House Budget Chair Paul Ryan's Medicare proposal, before he acknowledged that it is the "beginning of the conversation."

"For the last week, everywhere I go in Iowa people see me as the candidate of change because they turn on the television and see that … the people in Washington are not happy with me."

"I am the people's candidate, not the capital's candidate," he declared at the Christian Science Monitor’s breakfast series.

Gingrich spoke of his recent 17-city sweep through Iowa and how it presented a different picture of his presidential campaign saying, "The reports of my campaign's death were highly exaggerated."

"I was actually struck last week because while everybody in Washington decided the campaign was over, we were in Minneapolis, Lacrosse, and 17 towns in Iowa where none of those folks seemed to have gotten the message."

He went on to praise the press for changing his image from one of a Washington insider to an outsider, largely due to the flack over his at times conflicting account of how he views the Ryan plan for Medicare.

But at the breakfast, he attempted to set the record straight.

"If you want to liberate the American people with a better healthcare outcome, the Ryan plan is to begin the conversation," he said.

Pointing out that this is the "third time" in his life that the country has been through "Mediscare," and seriously debated a Medicare overhaul, Gingrich stated that he strongly supports decentralization and Ryan's approach to Medicare, including the provision for block granting to states. He also said he is against an individual mandate that every citizen must have health care.

He admitted that he, himself, is on Medicare.

"I'm over 65 … and I have a deep concern over what anybody's going to do to my Medicare,” Gingrich said.

And when it comes to the differences between the two parties Gingrich said, "The contrast between the left and the right is that the left wants sacrifice with a government bureaucracy deciding what the sacrifice is; the right believes that innovation, science, technology, markets, and choice can lead to dramatically lower prices."

The former House speaker also claimed that he has a "clear record of significant change in Washington,” including on welfare reform, Medicare reform and balanced budgets.