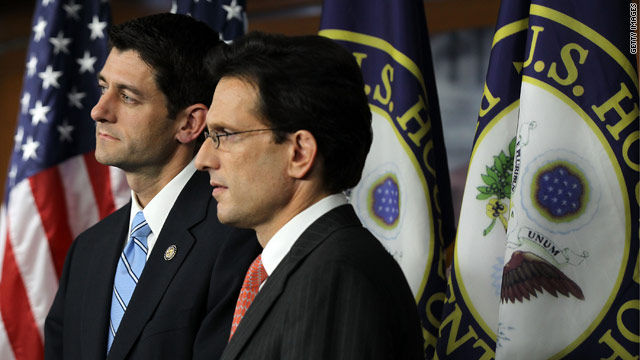 Washington (CNN) - House Budget Committee Chairman Paul Ryan may have waved off a run for President in 2012 in his appearance on a Sunday talk show, but House Majority Leader Eric Cantor told reporters on Capitol Hill Monday he would like to see Ryan make a bid for the GOP nomination.

Assessing the 2012 Republican field after Indiana Republican Governor Mitch Daniels announced this weekend he would not run, Cantor said he thought the GOP candidates already in the race "are strong candidates," but he also noted, "it's early still. These campaigns will begin to focus as the primary season nears."

Pressed on whether he'd like to see Ryan run, Cantor said, "sure," and the number two House Republican went on to praise Ryan effusively. "Paul's about real leadership – that's what this public so desperately wants to do right now is they want to see Washington that will lead. They don't want to see individuals dismiss the current problems as something that we can just sweep under the rug."

Cantor also had direct message to the Republican presidential field, saying it's time for everyone to get on board and publicly push for Ryan's controversial proposal to overhaul Medicare. The House GOP budget, authored by Ryan, includes a plan to change Medicare from a program that directly pays for seniors' health care to one that would provide subsidies for people to purchase coverage from private plans.

Cantor and Ryan, along with House GOP Whip Kevin McCarthy, made up a group of House Republicans dubbed the "Young Guns." The three GOP leaders helped raise money and recruit candidates in the 2010 midterms and co-wrote a book last fall.

The Majority Leader also made the point that GOP candidates should look to House Republicans' policy agenda as the race heats up. "Our role in the House, again as Republicans is to set the bar. It is setting the bar for leadership. It is taking on the tough challenges; it is putting solutions out there. And it's trying to deliver results."