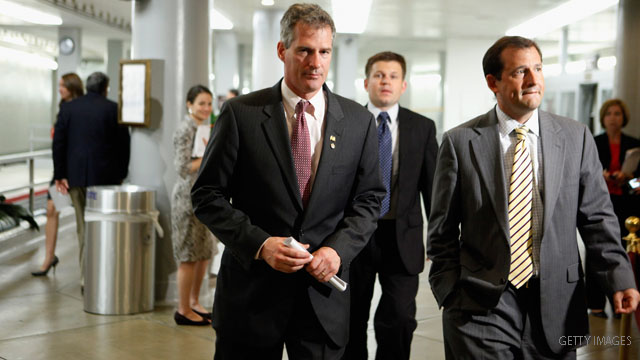 "While I applaud Ryan for getting the conversation started, I cannot support his specific plan – and therefore will vote 'no' on his budget, Brown wrote in an op-ed appearing in Politico.

"The reality is simple. Their party owns this proposal to end Medicare. Republicans clearly want a mulligan on the whole idea, but they cannot hide from the vote in the House. By the end of this week it will be clear to the nation which side but Medicare on the chopping block, which side stood up to defend it,” Senator Chuck Schumer, D-New York, told reporters on a conference call Monday.

For anyone 55 years or younger, the Ryan Medicare plan would replace the current system with new lump sum payments for private coverage.

Brown, facing a tough re-election battle next year in the historically Democratic state of Massachusetts, said he opposes his party's plan in the House because he worries it will end up costing seniors more.

"I fear that as health inflation rises, the cost of private plans will outgrow the government premium support- and the elderly will be forced to pay ever higher deductibles and co-pays. Protecting those who have been counting on the current system their entire adult lives should be the key principle of reform," Brown wrote.

Brown even borrows a turn of phrase from Democrats against the Medicare plan, saying "I do not think it requires us to change Medicare as we know it."

After Brown declared his position, Sen. Richard Lugar of Indiana announced his plan to vote for the Ryan budget Monday. Lugar is up for re-election in 2012 and his seat has been named as a target by the Tea Party.

Sen. Susan Collins of Maine has stated she will vote against the plan.

Another GOP member to look for is the other Maine senator, Olympia Snowe.

A source close to Snowe tells CNN she is leaning against the House GOP Medicare plan, noting that Maine has a very high population of seniors, and that she wants to “proceed carefully” with anything that substantially changes the program, “especially if there is a cost shift to seniors.”

Both not only face potentially tough battles to keep their seats out of Democratic hands, they also both have potentially serious primary challenges from the right in their own parties.

But the reality is most of the Senate's vulnerable members this year are Democrats, not Republicans.

Still, the Ryan Medicare plan has been so controversial – even within the GOP – that Democrats are practically giddy about forcing the vote on it this week in the Senate.

"Republicans clearly feel that this Senate vote is a lose, lose for them. On the one hand, enough top Republicans will vote for the House plan so it will remain clear that it's their party's official position. On the other hand, enough rank and file Senate Republicans, particularly those in more difficult races, will decamp and it will bolster Democratic arguments that the plan is extreme," said Schumer.

Schumer also said Democrats will cast this issue as a reason to keep Democrats in control of the Senate – a way to fend off what they describe as extreme Republican proposals.

Meanwhile, Senate Republicans plan to counter the Democratic move by forcing a vote on the budget President Obama sent to congress earlier this year. The GOP goal there is to get Democrats on record supporting a plan that doesn’t do much to cut spending or address the high cost of entitlements.

A Democratic source told CNN the expectation is most Democrats would vote against that, since the president’s budget does not include the broad goals the president laid out months later, to cut the deficit by trillions of dollars.

Republicans will also argue that Senate Democrats are shirking their responsibility, since they are in charge of the Senate and have not yet produced a budget blueprint of their own.