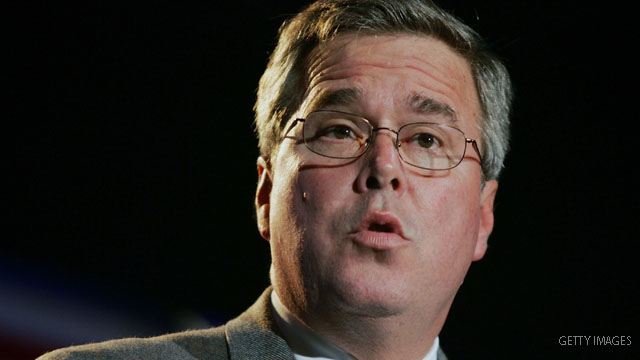 Several high-profile Republicans insist they will not run

Washington (CNN) - Several of the leading Republicans who are the focus of speculation about whether they will enter the 2012 presidential sweepstakes insist they will not run for the GOP presidential nomination.

At the top of some Republicans' wish list is former Florida Governor Jeb Bush, who is now championing education reform.

After Indiana Governor Mitch Daniels announced his decision Sunday not to run, Bush reiterated his intentions.

"While I am flattered by everyone's encouragement, my decision has not changed. I will not be a candidate for president in 2012," Bush said in a statement.

Republican Rep. Paul Ryan, chairman of the House Budget committee, has also received attention since he gained more national recognition for championing a proposed federal budget that would slash the federal debt by cutting spending and reforming Medicare and Medicaid. While his blueprint has been the focus of Democratic attacks, his long championing of the fiscal issue has garnered him praise from many Republicans.

Ryan, who announced last week he would not seek the Republican nomination for the Senate seat being vacated by Democrat Herb Kohl of Wisconsin, said Sunday he is focused on his task at hand.

Although Texas Gov. Rick Perry has repeatedly said he will not run for president, the rumors persist, prompting Perry spokesman Mark Miner to squash them again.

"Nothing has changed," Miner told CNN Monday. "The governor has no intention of running for president."

And the same goes for New Jersey Gov. Chris Christie, who has become a national figure for his fiscally conservative action and blunt talk.

A senior Christie adviser said the governor has "no change of plans" about 2012 following Daniels' announcement.