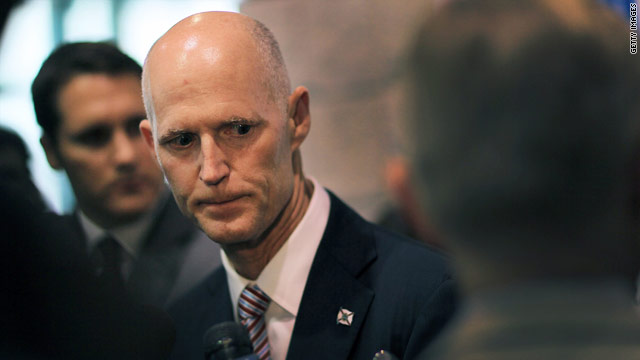 Florida Poll: New governor getting anything but rave reviews

(CNN) - Nearly six in ten Floridians are giving a thumbs down to the job their new governor is doing, according to a new poll.

A Quinnipiac University survey released Wednesday indicates that 57 percent of Florida voters disapprove of how Republican Gov. Rick Scott is handling his duties, up nine points from early April. Twenty-nine percent of people questioned in the poll say they approve of how Scott's performing in office, down six points over the past month.

The survey also indicates that 56 percent disapprove of the job the Republican controlled legislature is doing and a majority think the state's new budget is unfair.

"Voters have turned even more negative on Gov. Rick Scott since the last Quinnipiac University survey," says Peter A. Brown, assistant director of the Quinnipiac University Polling Institute. "It probably doesn't make him feel any better that the State Legislature is sharing the basement suite in the eyes of the electorate. The good news for the governor is that he has three and a half years to turn public opinion around."

The poll indicated that more than seven in ten Democrats disapprove of Scott's performance. But by a 57 to 28 percent margin, independent voters disapprove of how the governor's handling his duties. Republicans, on the other hand, approve of Scott's performance, 51 to 37 percent.
Scott, a billionaire health care executive who's primary win surprised many in his party, defeated Democrat Alex Sink, who was the state's chief financial officer, in last November's election, to succeed Charlie Crist as governor.

The Quinnipiac University poll was conducted May 17-23, with 1,196 registered voters questioned by telephone. The survey's overall sampling error is plus or minus 2.8 percentage points.