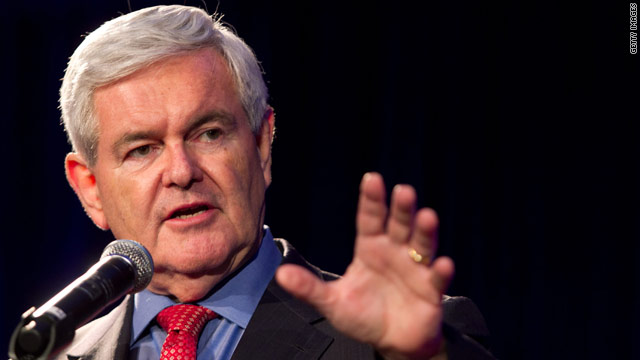 And yet Gingrich also took aim at the Massachusetts health care law passed under the governorship of potential presidential rival Mitt Romney, who is expected to officially declare a presidential bid after his current exploratory phase.

"'Obamacare' will be repealed. As will similar programs in the states," Gingrich predicted. Later in his address to a room full of voters in Derry, the former House speaker specifically mentioned the Massachusetts law.

As he's frequently done before, Gingrich explained the conservative disdain for the individual mandate - the provisions in the national and Massachusetts laws that require most Americans to buy health insurance as a way to lower overall costs.

"In addition to the unconstitutional nature of individual and employer mandates, we are learning that they simply don't work," Gingrich said.

He reasoned that the measures require the government to specify exactly what coverage must be included in insurance for it to qualify - and lead to political considerations in determining those minimum standards.

"The resulting costs to the taxpayer - and strain on the budget - leads the government to try and control health care costs by limiting health care services. The inevitable result is rationing by a nameless, faceless, unaccountable board of government bureaucrats. This has been the sad, unworkable path now being followed by Gov. Deval Patrick in Massachusetts," Gingrich said.

Instead, Gingrich explained, if he were president he'd work toward an alternative that would provide "a free market framework for health care, provide affordable, portable and reliable health care coverage, and establish a health care safety net focused on those in need."