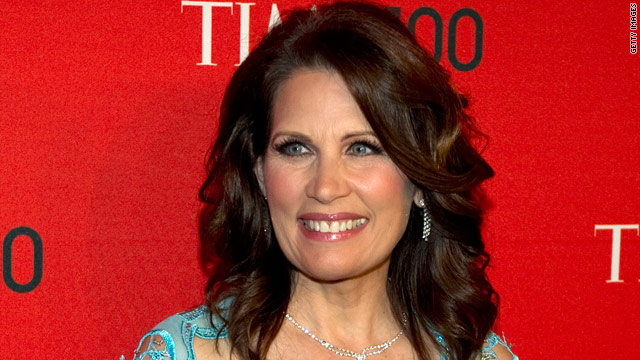 Her voice did, at least.

That’s because Bachmann, held up in Washington by a key House vote on the Patriot Act, wasn’t actually at the GOP fundraising banquet she was supposed to headline in Des Moines.

So Bachmann dialed in her appearance at the Polk County GOP's annual Robb Kelley Dinner, first via speaker phone with reporters, and then by a choppy Skype connection, to engage in a question-and-answer session with the ballroom full of party activists.

“We are starting the effort,” Bachmann told reporters who pressed her on how serious she is about mounting a presidential bid. “We already have a hired staff in Iowa, New Hampshire, in South Carolina. We have every aspect that we need in this effort.”

She then went a step further, promising that a presidential announcement will be made in the Iowa town of Waterloo, where she was born.

She said that hailing from Waterloo will give her a natural advantage against her rivals in Iowa, which will hold the first contest in the Republican presidential nominating contest.

Being a native Iowan affords her “every advantage a girl would want to have,” she said. “There is no downside to being born in Iowa.”

Though she reserved the right not to run, Bachmann strongly suggested that a full-blown campaign will be underway in the coming weeks. “We are putting plans into place,” she said.

Despite Bachmann’s best efforts to make up for her absence, some Republicans who attended the dinner said that skipping a long-planned event, even for a pivotal vote, might not the best way to endear oneself to the demanding Iowa electorate.

“It would be better if she were here,” said Paul Zietlow, founder of a Des Moines group called the Westside Conservative Club. “But in the long-term she’ll be all right.”

Her D.C.-to-Iowa Skype appearance, beamed into the GOP Dinner over a spotty Marriott internet connection, was a bizarre piece of political theater akin to a Tea Party version of Chatroulette.

Older members of the audience listened politely but shuffled in their seats as Bachmann, her voice tinny through computer speakers, blasted the Obama administration’s fiscal record and railed against raising the debt ceiling.

Bachmann’s image repeatedly froze on screen, and the room chuckled when the Skype signal went black and had to be re-established.

But awkward webcam appearances aside, it was clear from the rounds of applause after her riffs on same-sex marriage and tax reduction that Bachmann’s social and fiscal messages resonate with the conservative activists who will play a major role in the caucuses next year.

But Waterland was happy to note that Bachmann “has her act together."

“She is fluent on everything,” he said. “We won’t have to bring her up to speed on issues.”

State Sen. Kent Sorenson, the point-person for Bachmann’s early presidential effort in Iowa, said most people at the dinner were “being forgiving” about Bachmann’s absence since she was engaged with a critical national security vote.